“Words of Magic”: The Literary Heritage of Léon Bakst[1]

Of the many artists of the Russian Silver Age Léon Bakst (Lev Samoilovich Rozenberg, 1866-1924) deserves the highest acclaim for his contribution to both studio painting and the decorative arts. Among Russian stage designers, he enjoyed - and continues to enjoy - the widest recognition for legendary productions such as Cléopatre, Schéhérazade, Le Dieu Bleu and The Sleeping Princess, in which he astounded audiences with munificence of colour, tactile form and exposure of the dynamic force of the human body.

From the early 1910s until his death Bakst was a legislator of fashion in the ballet, haute couture, book illustration and even interior design. Accepting engagements in Paris, London, Rome and New York, he was an international celebrity who moved closely with the cultural luminaries of his time and was lionized for the spice and freedom of his exotic costumes and sets which have now become an organic part of European Modernism. Not surprisingly, celebrated as the most original designer for Diaghilev’s Ballets Russes, Bakst has been the subject of many monographs.[2]

However, Bakst was also an eager and elegant writer — a critic, theorist, historian, reviewer and even novelist, whose statements, published and unpublished, both reflected and informed the aesthetic of the Russian Silver Age. His correspondence with artists, writers and performers of the time such as Gabriel Astruc, Andrei Bely, Claude Debussy, Sergei Diagilev, Vsevolod Meierhold, Vaslav Nijinsky, Maurice Ravel, Ida Rubinstein and many others sheds much light on the way in which his own artistic psychology and affiliations evolved, while his essays, treating of a wide variety of issues (the performing arts, fashion, nudity, American technology, the “woman question”, poetry, antiquity, etc.), are examples of enlightened prose, lucid, engaging, topical and often provocative.

That Bakst was a gifted writer was recognized by professional writers such as Ivan Bunin and Zinaida Gippius and his regular correspondents such as Alexandre Benois, Rubinstein and Valentin Serov often commented on his literary talent. Distinguished by clarity of idea and elegance of language, Bakst’s publications in the Russian, French and American press such as “On the Art of Today” (1914), “Nudity on Stage” (1911), “How the Woman of the Future Will Dress” (1913) and “L’évolution du décor” (1923) and his travelogue “Serov and I” in Greece (1923) reinforce this opinion. Bakst contributed to a wide variety of books, journals and newspapers, from Nikoai Evreinov’s collection Nudity on Stage to New York Tribune, from Comoedia to Morning of Russia, from Apollo to Petersburg Newspaper, from Theatre and Art to Le Journal and from Town and Country to the New York Times. But if a number of Bakst’s texts are known and often quoted, many others remain unpublished and unfamiliar — and one purpose of the present publication is to draw attention to this lacuna.

A close reading of Bakst’s literary heritage serves two main purposes: his letters to correspondents such as Bely, Benois, Diaghilev, Lyubov Gritsenko (Bakst’s wife), Serov, Konstantin Somov and other representatives of Russia’s fin de siècle, for example, provide answers to a number of biographical questions: How did Bakst regard his role in the Ballets Russes? How did he interpret the professions of easel painter, book illustrator and stage and fashion designer? What were the iconographic sources for his exotic sets and costumes? What was his ideological attitude to the 1905 and 1917 revolutions? What was the sequence of events which caused him to convert from the Jewish faith to Lutheranism and then to reconvert? Analysis of Bakst’s writings also helps us to plot with greater accuracy the personal and professional liaisons which coloured and energized the evolution of Russian Modernism in general.

That Bakst was a man of the word is demonstrated not only by the high quality of his critical and creative writings and personal letters, but also by his proximity to the poets and playwrights of his time such as Bely, Alexander Blok, Gabriele D’Annunzio, Gippius and Vyacheslav Ivanov which often culminated in portraits or illustrations to their publications. Like other representatives of the Silver Age, Bakst regarded — and researched — the word as an intrinsic part of his intellectual worldview, and no full appreciation of Bakst the artist is possible without copious reference to Bakst the writer. The texts below, previously unpublished and part of an ongoing project to assemble, edit and publish Bakst’s complete writings (correspondence, critiques, manifestoes, diaries, creative prose) bear strong testimony to the richness and diversity of his literary heritage.

Because of the vastness and complexity of Bakst’s literary legacy, selecting the following examples has been a difficult task. A primary criterion, however, has been to provide a sense of the thematic scope, stylistic diapason and diversity of genre which distinguished Bakst’s writings. To this end, the editors have chosen specimens, deriving from different repositories, of his intimate letters, of his correspondence with colleagues on cultural issues and of his measured comments on the visual and dramatic arts. These statements are published here for the first time: the three letters and excerpts from Bakst’s novel in the possession of the Department of Manuscripts at the State Tretyakov Gallery were prepared for publication by Olga Kovaleva and Elena Terkel; letters from the Archives Nationales in Paris were prepared by John E. Bowlt.

The main corpus of the Bakst documentary materials, now in the Department of Manuscripts at the State Tretyakov Gallery (Archive of L.S. Bakst, Call No. 111; 2620 units), was donated from Paris by his son, André, in 1965, but the archive long remained underused. Occasional items have been published from the collection,[3] but by and large it has not been exposed and remains virtually intact. The archive is large, complex and variegated, consisting of letters to and from Bakst (in manuscript and typescript), critical, theoretical and philosophical essays (some unpublished such as “Le Théâtre de demain”), the travelogue “Serov and I in Greece” (published in Paris in 1923; represented in several typescripts and commentaries), creative prose, including the novel “Cruel First Love” and ballet librettos, statements pertaining to material property and legal cases, visiting cards, photographs, sketches and doodles often illustrating a particular point in a private letter. Some of the essays such as “How the Woman of the Future Will Dress” and “Choreographies et décors des nouveaux ballets russes” were published in Russian, French, Italian or American periodicals and exhibition catalogues during Bakst’s lifetime. Some of the essays were also published in English or French translations from the original Russian.

The secondary corpus of Bakst materials in the Department of Manuscripts at the State Russian Museum in St. Petersburg (140 items) consists mainly of letters to and from the artist, involving numerous contemporaries such as Benois, Valery Briusov, Diaghilev, Alice Warder Garrett, Alexei Remizov, Misia Sert and Somov. Again, with few exceptions, the bulk of this material has not been published.[4]

While the major part of Bakst’s writings is held in the State Tretyakov Gallery and the State Russian Museum, there are also significant items in the Russian National Library, St. Petersburg, and in the Russian State Archive of Literature and Art (RGALI) in Moscow as well as in European and American archives upon which the selection below also draws.

A citizen of the world, Bakst was himself an emissary of Russian culture to Western Europe and the USA where he lived and worked for extended periods. Convinced of the value of the printed word as a vehicle for disseminating information, Bakst wrote much, lectured and published. Study of Bakst’s literary and artistic heritage relates to the broader question of the Russian diaspora, especially the destiny of Russian artists in Europe and America. It is to be hoped that examination and appreciation of Bakst’s magical words will help restore a major literary legacy to the treasure-house of the Russian Silver Age. 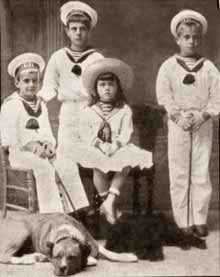 Léon Bakst’s novel, Cruel First Love, is autobiographical in the sense that the plotline is based on the author’s own love story and almost all the heroes in the text have real life prototypes. Many of whom can be identified easily - in fact, there can be little doubt that it was the family of Grand Duke Vladimir Alexandrovich (1847-1909, the third son of Emperor Alexander II) and Grand Duchess Maria Pavlovna (1854-1920; née Princess Mecklenburg-Shwerin). In the early 1890s Bakst tutored their children, Boris Vladimirovich (1877-1943) and Elena Vladimirovna (1882-1957), in drawing and painting.

“Well!...Of course, I didn’t draw anything for you”, said the Princess after the Englishwoman, balancing her skirts so gracefully, had left. “And shame on you for being manquant (which is what Alexander Dmitrievich[I] told maman) and, in any case, Georgie smeared all over the drawing which I had just begun on purpose! Have to find something new, less tedious... mais quelque chose. really great!”, she continued in broken Russian, with mistakes and with the foreign accent of a French woman who had been living in Russia just for a short time.

“Your Highness, I think you simply hid the drawing away. Maybe you were fed up with it. But we really ought to find it, otherwise..we’ll have to ask Miss Dryden[II] to help your Highness..”

Princess Nelly made a fierce and comic face and, sighing affectedly - just like a bad French actress - obediently took the half finished drawing out of the cupboard, not at all stained. The lesson began. A quarter of an hour later a dense siren started up in the classroom and Princess Nelly rushed up, listened to the receiver and made terrified eyes at me.

“Maman is asking how I’m behaving at my lesson and whether I’m doing a good job”, the Princess said loudly in French and, handing me the receiver menacingly, made a silent whisper with her crimson lips: “Tell her that I’m doing an excellent job”.

I obeyed and we went back to the table.

“But now we have to prove it”, I said in French, “so at least try to finish the drawing today”.

“I forbid you to speak French”, Princess Nelly made a serious face, “You just can’t speak properly.

Although, to her delight, I blushed, I bantered, “Just as properly as Your Highness speaks Russian”.

She looked at me sideways, drawing very affectedly just like a grand high society coquette.

“But I know how you speak French with actresses. Yesterday Alexander Dmitrievich showed us how”.

I maintained my pedagogical poise. Without responding, I corrected her mistakes in the drawing, erasing the erroneous lines with a rubber. Dissatisfied with the inclination and breadth of her strokes, I squeezed my pupil’s three fingers in my hand and used this to guide her across the paper, covering the drawing with lines bold and well spaced out.

Surprised, she looked at these trifling strokes and then at her hand in my grasp and threw a glance at me, trembling with affectation and laughter.

“Why are you squeezing my piano hand?”

This was so unexpected that I started to laugh: the discipline of the lesson had been broken. 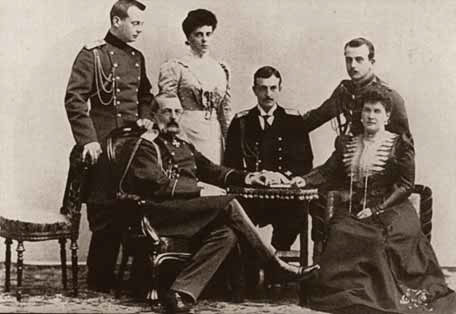