Viktor Ufimtsev “We Called Ourselves Innovators”

A retrospective exhibition of the work of Viktor Ufimtsev (1899-1964), the “luxuriantly colourful painter” who is regarded as “the most extremely ‘left’ artist of Asiatic Russia” opened in the Tolmachi Hall of the Tretyakov Gallery in early September.

Ufimtsev belonged to the generation of Siberian artists who matured during the first post-revolutionary decade. Among them were Elena Korovai, Nikolai Mamontov, Boris Shabl-Tabulevich, Vladimir Tronov, Ivan Shadr, and others. In 1921, inspired by the lectures and exhibitions of David Burliuk, Ufimtsev, together with Mamontov and Shabl-Tabulevich, organized “The Diamond Trio”, a group which united young representatives of Omsk culture who called themselves futurists.

Futurism for Ufimtsev was not so much a trend in art as a credo in life. The quest for testing new techniques and genres, and an appetite for the unknown was the main feature of his artistic activity.

His life was full of travels. Journeys were not only movement in space for him, but he also looked for new turns of fate and creative metamorphoses. During the 1920s and 1930s he traveled through all of Western and Eastern Siberia, visited the Caucasus and the Far East and stayed in Central Asia several times; the latter became a new Motherland for him.

Having come to Turkestan for the first time in 1923 together with his friend and colleague Nikolai Mamontov, Ufimtsev was struck by the unusual and wonderful combinations of colour there. His cubist-futuristic paintings of the 1920s are distinguished by the subtlest play of shades. Exotic architecture was also a material for the artist’s exercises; he created cubist compositions of simple geometric parts of minarets, madrasahs and dwelling houses. From the late 1920s onwards Ufimtsev made numerous sketches in a neo-primitive vein, striving for his own style, in which he scored a brilliant success by creating a series of gouache paintings “Turksib” in 1931.

According to a Decree of the Central Committee of the Soviet Communist party of April 23 1932, “On Restructuring    Literary-artistic Organizations”, the Artists’ Union was set up in Uzbekistan, and Ufimtsev was elected a member of its organizing committee. Having become an official figure, the artist came under the close surveillance of Communist ideologists. Previously, his art had been uniformly experimental, whereas now it became divided into two distinct fields: the official and the unofficial.

As is well known, during the 1930s many Soviet artists switched from avant-garde experiments to painting landscapes and still-lifes and doing interior decoration work in an attempt to avoid official pressure and stay within a non-ideological framework. Under the guise of creating canvases in the spirit of Socialist Realism, Ufimtsev still continued to work in other manners, sometimes close to the avant-garde. In his landscapes and still-lifes of the 1930s he pursued his quests in painting, without displaying modernistic trends.

During World War II Ufimtsev headed the political poster studio of the Uzbekistan Telegraph Agency which included several graphic artists and painters — members of the Artists’ Union, among them Nadezhda Kashina, Vasily Rozhdestvensky and Bakhram Khamdami.

Ufimtsev anticipated changes connected with the prospects of traveling to other countries, to a hitherto unknown world, during the 1950s and 1960s. The freedom of travel inspired him and promised broader horizons in his art.

In the early 1960s he visited Afghanistan, Tunisia, India and France (namely, Paris). These journeys inspired him to create several series of gouache paintings in which the artist seemed to recall his wanderings in Asia in his youth and evolved new methods and skills closer to the context of his time.

The solo exhibition in the Tretyakov Gallery is the first monographic exhibition of Ufimtsev’s works of such scope, related to the early and later periods of his artistic life. In his lifetime it was only for the official part of his work in the spirit of Socialist Realism that he was known to the public. In the 1960s Igor Savitsky collected works of the Uzbek avant-garde for the Karakalpak Museum of Fine Art, including some of the forgotten pictures by Ufimtsev created in the 1920s. Quite a few of them became part of private collections and remained unknown to the broad public. In the 1980s, when interest in the art of Siberia became greater, Omsk museum curators turned their attention to Ufimtsev’s heritage from his Omsk period and studied it more carefully. The last period of his work in Russia is only represented by a few works kept at the Museum of Oriental Art.

The exhibition at the Tretyakov Gallery enables art lovers to familiarize themselves with the development of Ufimtsev’s artistic concept over several decades, from the 1920s to the 1960s.

The exhibition of works by Viktor Ufimtsev includes canvases kept at two Omsk museums: the Vrubel Museum of Fine Art and the Historical and Folklore Museum; the Moscow Museum of Oriental Art; and the collections belonging to Viktor Spengler and Ildar Galeyev, as well as the “Vellum” Gallery. 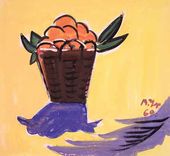 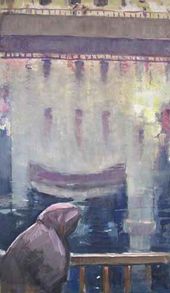