The 175th anniversary of the birth of Pavel Tretyakov was marked by a gala celebration at the Tretyakov Gallery on December 27 2007, organized by the Tretyakov Charitable Foundation.

The name of Pavel Tretyakov resounds with a chord of high responsibility and profound gratitude in the hearts and minds of every person working at the gallery, studying and popularizing our national art treasures. Long years of work at the gallery have only strengthened such close ties. There are individuals at the gallery whose career there comes to 42 years, and they are proud that this is precisely the same number of years which Pavel Tretyakov devoted to his activity as a collector. From the time of the purchase of his first canvas and until the last hour of his life he was inspired by the dream of his youth — to support Russian art and create an art museum accessible to the general public. The preservation of this priceless collection for future generations is the noble mission of the staff of the gallery.

This was why the gala meeting on the occasion of the 175th anniversary of Tretyakov's birth was opened by inviting to the stage employees whose work record was equal to, or exceeded, 42 years. They were warmly greeted and presented with colourful books and albums about the gallery, as well as flowers, from the members of the Board of Trustees of the Tretyakov Charitable Foundation. Recipients were the great-great granddaughter of the founder of the gallery Yekaterina Khokhlova, the writer Yury Polyakov, editor-in-chief of "Literaturnaya Gazeta" and a member of the Council on Art and Culture under the President of the Russian Federation, and the director of the gallery Valentin Rodionov.

Then the audience enjoyed a concert of romances composed by Alexei Verstovsky, Alexander Varlamov and Mikhail Glinka in 1832, the year of Pavel Tretyakov's birth. They were sung by Galina Borisova, People's Artist of Russia and a soloist of Moscow's Bolshoi Theatre.

After that the President of the Tretyakov Foundation Viktor Bekhtiev announced the names of the laureates of the Tretyakov Prize for 2007, to the flourish of trumpets. The laureate's certificate "For Loyalty to Their Profession and Long Service to Russian Art" and a Tretyakov family silver monogram were awarded to Olga Allenova, Vitold Petyushenko and Alina Teis.

Olga Allenova started working at the Tretyakov Gallery in 1964, after graduating from the art department of Moscow University. Initially a museum guide distinguished by her deep knowledge and a talent for research, she took an active part in the restoration of the exhibition of paintings of the 18th and first half of the 19th century, after the prolonged reconstruction of the Gallery, and accumulated great experience in popularizing Russian art. Allenova is a co-author of a comprehensive academic catalogue of painting, including such artists as Borovikovsky, Kiprensky, Bryullov and Ivanov, who are well represented in the collection of the gallery. She has also written and published a number of articles and monographs which invariably draw much interest from her colleagues and the general public. Her profound knowledge and professional intuition are indispensable in the research, analysis and expertise work on paintings.

Vitold Petyushenko came to work at the Tretyakov Gallery in 1976 as the head of the collecting department and established the concept of its development, as well as its funds. He was also engaged in improving the permanent exhibition of Soviet art, working out conceptual displays. His previous experience at the fine arts department of the "Great Soviet Encyclopaedia" Publishers and the authorship and publication of over 300 articles on the subject proved a good background for the position of Chief Scientific Secretary of the Tretyakov Gallery which he occupied from 1982 until 2007. As one of the most experienced and recognized experts in the museum's structures, Petyushenko is always ready to share his profound knowledge with his colleagues. He is one of the initiators of the general project "The Golden Map of Russia", having established its basic principles, and organized and prepared seven exhibitions within the framework of this project.

Alina Teis is an artist-restorer of the highest qualifications and the head of the restoration department of drawings of the 18th through to the 20th centuries. She is a talented master who inherited her skill from her parents (her father, E.S. Teis, was a graphic artist, while her mother, E.A. Kostikova, an artist-restorer, headed the graphic restoration department at the Grabar All-Russia Art Scientific Restoration Centre from 1952 to 1994) and who was happy to work under the tutorship of such a restorer as E. Divova. During her 44 years of work at the Tretyakov Gallery Alina Teis restored more than 1,500 drawings from the Gallery's collection. In the process of preparing works for the exhibition "Colossus of Graphic" she developed principles for the restoration of large-scale drawings, as well as those on special paper used for hand-made and printed posters of the early 20th century. Alina Teis used a wide range of methods for restoring pastel drawings on grease-proof paper, ordinary paper, cardboard and canvas. Thanks to her creative and research activity alongside the instruction given to her colleagues, one can speak of a special style in the school of restoration of drawings at the Tretyakov Gallery.

The choir of the St. Nicholas Cathedral in Tolmachi sang "Long Live!" for the heroes of the celebration and the audience. Pavel Tretyakov himself had been a devoted parishioner of this church in his lifetime.

A performance titled by the words from Pavel Tretyakov's letter to his mother Alexandra Danilovna "Honoured to be your son" was based on the reminiscences of Tretyakov's daughters, Alexandra Botkina and Vera Ziloti, as well as archive materials. It was staged by the veteran of the Moscow Arts Theatre Yevgeny Radomyslensky, a member of the Board of Trustees of the Tretyakov Charitable Foundation.

The celebration ceremony was held in order to revive once again the memory of Pavel Tretyakov, a great patron of the arts who donated his wonderful collection to Russia and its people. Those working at the Tretyakov Gallery for the benefit of Russia's national art treasury are both happy with, and overwhelmed by, their responsibility!

Alina Teis, laureate of the Pavel Tretyakov Prize; Viktor Bekhtiev, President of the Tretyakov Charitable Foundation, and Eugeny Lancere, a member of the Board of Trustees of the Foundation 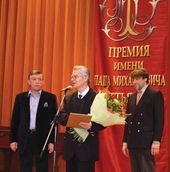