“DIEX LOVOLT” - God wishes it so

The exhibition of the graphic art of Toulouse-Lautrec opened on February 18 in the Tretyakov Gallery’s Engineering Building. The Tretyakov Gallery thanks the Library of the National Institute of Art History in France for generously lending to the Russian exhibition works from their collection. Most sincere gratitude is extended to Leonard Gianadda, who supported the event financially and made it possible to exhibit Lautrec’s caricature self-portrait from a private Swiss collection. Special thanks are also to the Pushkin Museum of Fine Arts, and to its director Irina Antonova, who contributed to the exhibition the work “Woman at the Window”. The project would likely not have reached reality without the substantial financial support of Bank VTB. The gallery thanks the bank for guaranteeing the financing of the project.

Few people know that in 1910—1925 the work “Yvette Guilbert, Singing Linger, Linger, Loo” by Toulouse-Lautrec, was part of the Tretyakov Gallery collection — thanks to the Russian collector Mikhail Abramovich Morozov (1870— 1903), one of the first collectors of French art in Russia. After Morozov’s sudden death in 1903, his widow, following his will, passed the collection to the Tretyakov Gallery. Together with works by Russian artists, the museum received “Yvette Guilbert” and such masterpieces as the “Portrait of Jeanne Samary” by Renoir, “The Tavern” (also known as “Open Air Cabaret”) by Edouard Manet, and many other paintings.

When in 1925 the decision was taken to create a museum of new Western art, it received the works by foreign artists from the Gallery’s collection. In 1948 this museum, “the bulwark of formalism”, became a victim of Stalin’s repressions in the field of culture. The Museum was closed, and the works, once bought by the Moscow collectors, were distributed between the Pushkin Museum of Fine Arts and the Hermitage.

But Morozov’s decision to give the precious collection to the Tretyakov Gallery must have been well-grounded. He might have thought that it would be important to exhibit works by Russian and foreign artists in one museum space, so that they could be compared and more profoundly understood...

“Just as there are passionate lovers of bullfighting, executions and other disconsolate spectacles, there are lovers of Toulouse-Lautrec. Mankind is blessed not to have many artists of this kind,” wrote the French journalist Jules Roques in “Le Courier Frangais” in September 1901, shortly after Lautrec’s death. Apparently, even his own mother who deeply loved him, when asked who her favourite artist was, replied in confusion: “Not my son!”

When it became clear that art was the sole enthusiasm of Henri, disfigured by a number of physical maladies, his family helped him to decide whom he should choose as his teachers. His father’s friend, the animal painter Rene Princeteau, happened to be Lautrec’s first teacher. Later he started taking lessons from two well-known French masters, Leon Bonnat and Fernand Cormon. Brought up in his family’s luxurious chateaux, very well-educated, Lautrec has problems in adapting to the resulting new environment: “I had to force myself because — and you know it as well as I do — the bohemian life had not been my choice and I will never get used to this environment,” Lautrec, aged 22, wrote to his mother on 28 December 1886.

But there was no way back, and he eagerly started conquering this environment — and succeeded. Witty, charming, hospitable and, most importantly, hardworking, he soon felt at his ease among his fellows, and decided to make Montmartre his home.

The exhibition at the Tretyakov Gallery focuses on the most productive decade of the artist’s life, during which he elaborated his own unique style. He portrayed the reality that surrounded him: bars, cafes, theatres, circuses and brothels, and created a real panorama of the spectacular Parisian atmosphere of artistic and real-life pleasures.

Everybody plays his or her particular role in his “human comedy”: actors, chansonniers, dancers, storytellers, clowns, ladies of the night and, of course, the audience, the spectators. From time to time the audience is transformed by the artist into the main performers. He reflects the world not by a descriptive succession of actions but by an expanding metaphor.

When Toulouse-Lautrec attended performances at the Folies Bergeres, or became infected by the festive atmosphere of the Moulin de la Galette, or excited by a violent can-can performed by La Goulue in the Moulin Rouge, he remained first and foremost interested in all this “Babylonische verwirrung” (Tower of Babel), a melange of spectators and stars. He was studying their gestures, poses, the expressions of their faces. “Waylaying a victim, just like one of the hunting birds that his father used to train, Lautrec is ever observing, and his little paw is ready to grasp what he needs. Thousands of images sweep before him, leaving him completely indifferent, and then he suddenly reacts, grasping the essence, seemingly off-the-cuff.”[1] Such are the images of La Goulue and Mome Fromage in the Moulin Rouge, Loie Fuller dancing in the Folies Bergeres in a whirlpool of colourful silks, or Yvette Guilbert, “telling” her songs, or the unequalled Marcelle Lender, performing the famous bolero.

In 1893 Lautrec became a passionate theatre-goer. His interest in people equals and even exceeds his interest in performances. He makes many sketches (Rejane and Galipeau in the Play “Madame Saint Gene”, “The Dress Rehearsal in Folies Bergeres”), and designs theatre programmes. The artist finds themes for his work on both the backstage and in boxes, where sometimes “another very interesting performance in a performance is being played”[2] (“The Box with the Gilded Mask”).

Lautrec took his passion for rendering life dynamics from Edgar Degas but he was also interested in cinematic and photographic achievements. Like many other artists, Lautrec appreciated Japanese engravings — laconic and refined. Like the great Japanese masters, he was striving to attain the perfection of his images. “The press was at a standstill. The printing office looked empty. But on the last step downstairs I suddenly found Lautrec — he was not bending but simply lying, stretched lengthwise on the [lithographic] stone which was considerably longer than him. Not satisfied with what he had done, he was intently correcting and smoothing the board which, immediately after noon, was to be used for making a print with the first colour”.[3]

The exhibition gives an idea about a range of Lautrec’s graphic techniques — from the original (the essential “Self-portrait”) to the printing method. His work for Paris magazines in 1886—1887 is less known — he contributed to a dozen periodicals, including “Le Rire”, “Le Mirliton”, and “L’Escarmouche”. These were mainly advertisements of performances given in Parisian theatres and for actors who played there. The drawings are often ironic and almost grotesque (“Pourquois Pas?... Une Fois n'est pas Coutume”, or “Why Not?... Once is not to make a Habit of it”.)

Lautrec came from the so-called “secret” houses where he would settle down for long and arrange his temporary workshops. These “carnal institutes”, as they were called by Arsin Alexandre, a journalist of the time, allowed Lautrec to represent the residents of these houses in their intimate surroundings, not meant to be seen by a stranger: sleeping, half-dressed, getting dressed, at their toilet — with brushes, bowls, stockings and towels. All of them became characters of the lithographic series “Elles”. “His drawings are not mere tracings copying reality but a totality of signs which reveal reality even more neatly; these signs are unexpected and make life itself come to a standstill for a moment.”[4]

The smoothness of his lines, fineness of his drawing, and tenderness of subtly changing nuances make this series a genuine artist’s tribute to all these “fancy ladies”, in whose company he felt at his ease. It was they who helped Lautrec accept his appearance and soften the sentence that he passed on himself, and that Yvette Guilbert once heard him utter: Love does not exist!

“He loved his muse in a profound and tragic way ... he spent sleepless nights, visited show-booths and taverns, wore large and extravagant ties . In short, he trusted and missed her, and we — well no, we did not do it, because it is not convenient to take a fancy to such extent and to appear so eccentric; we chose decency, we were as decent and prosperous as in heaven.”[5] These lines were not written about Lautrec but about the Russian artist Nikolai Sapunov (1880—1912). When Lautrec died, Sapunov was twenty. Ten years later, Lautrec became posthumously famous and many artists became interested in his works. As for Sapunov, he was invited by Diaghilev to make stage designs for the “Russian Seasons” ballets to be staged in Paris. We hope that our exhibition will provoke reflection on the destinies of Toulouse-Lautrec and Sapunov, and, probably, also of Boris Grigoriev, Mikhail Larionov, as well as on the Russian playbill and poster artform.

This exhibition could have a different name — for example, “About a Collector and His Collection”. Most of the works exhibited were collected by Jacques Doucet, whose life shows some surprising similarities with that of the founder of the Tretyakov Gallery. Just like Pavel Tretyakov, Doucet had no substantial education but inherited from his parents a small family business which he shortly managed to turn into a prosperous enterprise — one of the first “haute couture” shops.

Historians mention Doucet among the first great Parisian couturiers, and, thanks to his amazing intuition, he is considered to be one of the followers of the art deco style. He created clothes for great actresses: Sarah Bernhardt, Gabrielle Rejane, the Belle Otero, members of royal families, rich ladies and gentlemen on both sides of the Atlantic. The successful entrepreneur started using his quickly gained fortune to create a collection of works of art and antique furniture. But his tastes changed.

In 1912 he sold his collection and started buying modern art. “I always want to see what comes next,” confessed Doucet. He met many young writers to whom he delicately offered support by granting a modest pension to one, or hiring another as a librarian and so on. The library is his new passion.“He was one of the most cultured lovers of art. He was not afraid of making a mistake and focused on the latest works. He thought that a true art lover should be more appreciative of what is born and lives in his presence rather than what he inherited,” wrote Andre Suares, one of collector’s “pensioners”, about Doucet.

The same could be said about Tretyakov. Each of these two perfectionists set himself a task which seemed unattainable for a private person: one decided to create a museum of national art in Russia, the other — in France — decided to compose a unique library on the history of art and architecture. Both achieved their goals. One bequeathed his fine arts gallery to Moscow, the other left his enormous library to the University of Paris.

The project entitled “Toulouse-Lautrec. The Pleasures of Paris” is a tribute not only to the great artist but also to Jacques Doucet, a great patron of art. It is thanks to him that we have the pleasure of seeing in Moscow the remarkable works by Lautrec of which his family were so ashamed that they asked him not to sign his paintings with their aristocratic family name. He agreed and for a few years signed his works with the pseudonym Treclau. But time corrects everything, and now the world knows this ancient family thanks to Earl Henri and no-one else. The coat of arms of the Toulouse-Lautrecs bears the words in old French: Diex lo volt — God wishes it so. 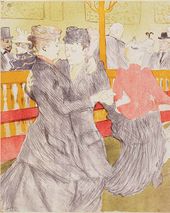 The Dance at the Moulin Rouge. 1897
Lithograph. 41.6 by 34.5 cm. The Jacques Doucet collection (National Institute of Art History, Paris) 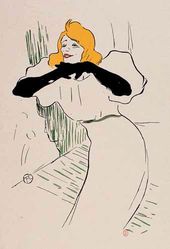 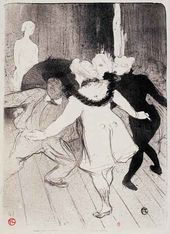 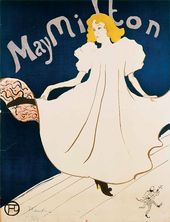 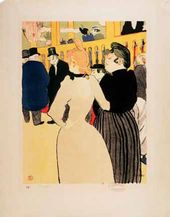 At the Moulin Rouge: La Goulue and the Môme Fromage. 1892
Lithograph. 62.9 by 49.8 cm. The Jacques Doucet collection (National Institute of Art History, Paris) 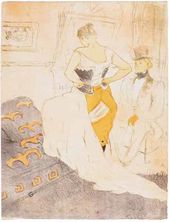 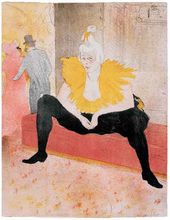 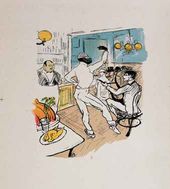 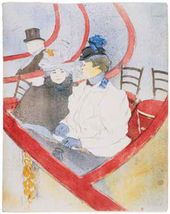 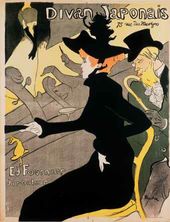