Sculpture and the City 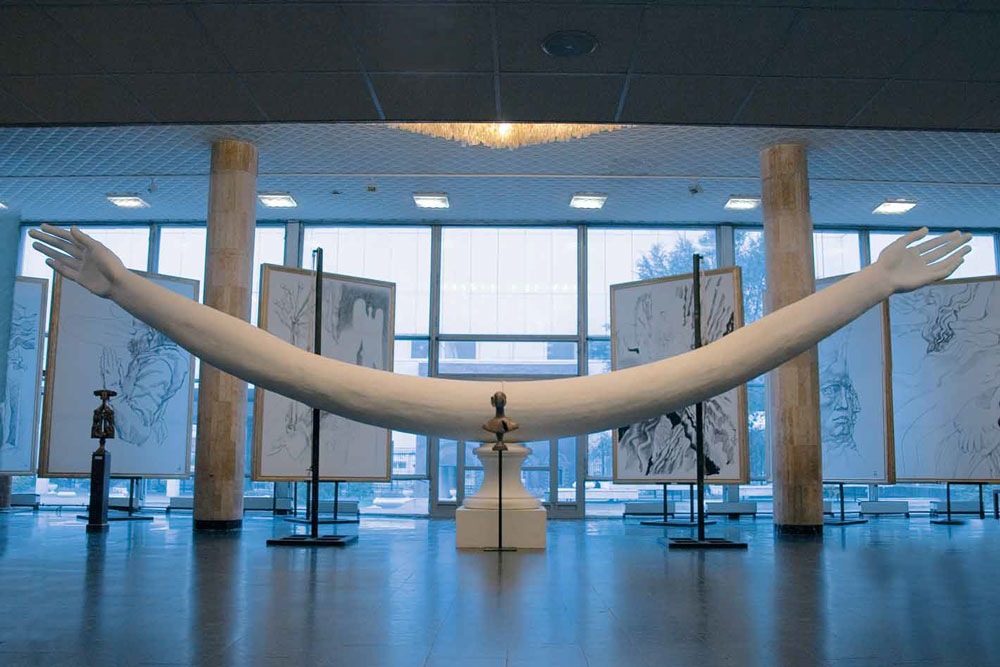 The two parts of the exhibition complement each other perfectly, both focussing on the transformation of space through plastic art.

Displays of sculpture in historic urban locations are rare, yet highly emotional and vivid events. Through Alexander Burganov's sculpture, Lavrushinsky Pereulok, always a busy spot, has been transformed into a series of remarkable spatial compositions entitled "The State”, "Culture”, "Society” and "Tradition”.

The theme governing the display in the Tretyakov Gallery on Krimsky Val is "The Bearing of Gifts”. The idea was, of course, prompted by the series of exhibitions of masterpieces from leading Russian and European museums held in honour of the Tretyakov Gallery's 150th anniversary. Burganov's display occupies the foyer, landing and mezzanine bearing Tatlin's famous tower. The streams of visitors entering and leaving the exhibition space form part of this exciting new composition.

The man behind this fascinating fusion of people and sculpture, Alexander Burganov, is a multi-talented artist. Like many of his eminent contemporaries, Burganov has made his mark on sculpture, architecture, painting and graphic art, his bold and vivid imagination even leading him to create a unique theatre, in which sculpture comes alive to play its part alongside the actors. Burganov's multi-faceted gift bears testimony to his place in the universe of art, where the artist creates not merely works, but worlds. Here, everything, from the architectonics of bodies in space to the characters peopling the landscape, is created by the artist.

Throughout his life, Alexander Burganov witnessed a number of radical political, economic and social changes, which inevitably brought about shifts in the intellectual and cultural climate. As a result, his own work underwent many considerable changes. Burganov's first teacher was Grigory Motovilov - an outstanding master whose sculptural compositions adorned the finest Stalin's Empire style architectural ensembles. An expert in ancient literature and a real intellectual polyglot, Motovilov was also an exceptional teacher. Perhaps the greatest gift Burganov received from this remarkable man was that particular inner vision and sense, which allow the sculptor to perceive the harmony of volume and size, the relationship of an object to the surrounding space - the underlying vision which prevails over superficial decoration and subject matter. Thanks to Motovilov's teaching, perhaps, the transition to the "austere style” of the 1960s artists (shestidesiatniki) was, for Burganov, a natural one, allowing him to focus on pure form and the correlation of rhythm, proportion and structure in space. The sculptor's new approach to creating shapes and images was based on an abstract view of volume, where size is condensed into a logical formula.

Alexander Burganov's muse always brings together and generalises, her arms outstretched in an all-embracing symbolic gesture. The sculptor's plastic language is self-sufficient. The elements of his sculpture vary, yet are always intrinsically linked with the whole, forming the distinctive "Burganov code”. Indeed, from the very outset Burganov's art has contained a number of symbolic images which reappear in virtually every composition: columns, frames, hands, muses, horses and flying, dynamic hangings.

Alexander Burganov is not affiliated to any artistic movement or deliberately invented school. The only idea to which he fully subscribes is that of creating one's own universe. Whilst playing an active part in Russian cultural life and in international projects, and maintaining an extensive network of contacts, the sculptor has never joined a single group, never become part of any association proclaiming this or that set of priorities in art.

In the 1970s, Burganov entered the world of Western art: at that time, many Russian artists were interested in closer links with Europe. Europeans found faraway, mysterious Russia fascinating; yet their main interest lay in extreme manifestations and dissident stories. For apolitical Russian artists, who created art for art's sake, competing with international masters was almost impossible. Thus, acquiring a name abroad and taking part in foreign art projects was extremely important. A number of Burganov's sculptures appeared in Yugoslavia, Germany and Belgium: the Russian master succeeded in gaining international recognition.

In 1984, Burganov's monumental composition "War and Peace” was purchased by Peter Ludwig, the eminent German collector and founder of a number of major European museums. Symbolising the eternal struggle between Life and Death, the composition features a large group of horses fighting in a cramped cage, to represent death, war and violence. Above these stand the symbols of peace, life and creation: female figures representing Youth, the Beloved, the Expectant Mother, the Mourner and the Woman Praying. Ludwig wrote to the sculptor: "The sculpture has now found a home in Aachen, in the Eurogress [conference centre]. The crowds of people constantly visiting the centre for various events always notice the sculpture and admire it.”

In the 1980s, Alexander Burganov made a number of sculptures for the Belgian cities of Liege, Marchien-o-pond, and Leuven. This move into the European art space proved vital: soon, sculpture came once more to be internationally recognised as high art. To the European space, Burganov contributed his powerful plastic sculpture, perfection of form, harmony of image and dialogue with classical heritage.

1999 saw Burganov win the American competition to design a statue of the poet Alexander Pushkin in Washington. The first Russian statue in the USA, this monument was erected near the White House. Its importance in the eyes of the American public is hard to overestimate. The project was approved by a Founding committee which included representatives from the White House, Washington City Council, George Washington University, American-Russian Cultural Cooperation Foundation and the Library of Congress. Besides his Washington Pushkin, Burganov created a number of other statues of Russian cultural figures, such as the statue of Ivan Bunin in Voronezh, statue of Pushkin in Izhevsk, statue of Pushkin and Natalia Goncharova in Moscow and the Russian capital's statue of Elena Gnesina.

Perhaps the highest point of Burganov's career in Europe was his outdoor exhibition in one of Brussels's central squares. Looking back, we see similar examples in other countries: in 1956, Joseph Hirshhorn, the famous collector and father of the Hirshhorn Museum and Sculpture Garden, Washington, organised a touring exhibition in the USA, which brought over 200 19th- and 20th- century sculptures to a whole string of American cities over several months. Fernando Botero exhibited his sculptures in a square in Madrid, Henry Moore did the same in Florence, and Olivier Strebelle showed his work in an outdoor display in Paris. Proposing that Burganov continue this illustrious list, Brussels was not merely showing the high esteem in which it held the sculptor, but also offering a challenge: creating an opportunity for a major new exhibition to transform the urban space. Burganov had already had experience of holding open air exhibitions in other cities: his sculptures had been shown in parks in Aachen and Munster, and during a festival in Frankfurt on the Main.

Now, Alexander Burganov is using his European experience of transforming urban space to create his own world in Moscow's Lavrushinsky Pereulok. The display surrounding the Tretyakov Gallery is a unique universe, possessing its own coordinate system, inner links and hierarchy. Transforming spatial structures and bringing together sculpture and architecture are special talents of Burganov's. As an architect, this master is no less fascinating and intriguing than as a sculptor: the entire architectural and landscape ensemble of the Burganov's House Moscow State Museum was, of course, designed by Burganov himself. All his sculpture, architectural, graphic and literary works adhere to a single poetic code and are imbued with the inspiration of the true romantic.

The Tretyakov Gallery offers this wonderful artist a new opportunity to fascinate and enrapture viewers by showing his sculptures in the contemporary urban space and introducing elements of play into his plastic display. 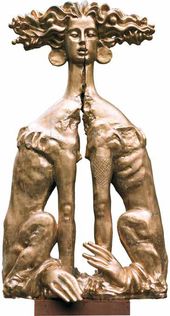 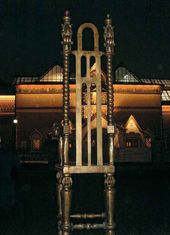 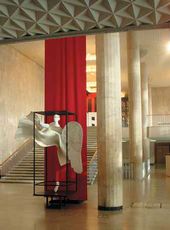 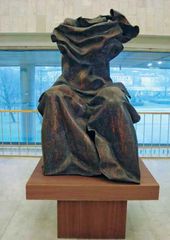 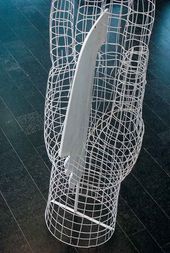 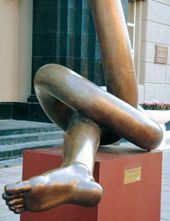 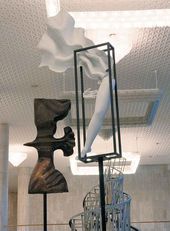