An important figure in late avant-garde art and a pupil of Kazimir Malevich, Konstantin Rozhdestvensky (1906-1997) is, nonetheless, little known to Russian art lovers. The current retrospective exhibition in the State Tretyakov Gallery is the first large-scale public showing of Rozhdestvensky’s drawings and paintings to take place in Russia.

Despite appearances to the contrary, Konstantin Rozhdestvensky's development as an artist was anything but straightforward. His painting career was interrupted precisely in his most fascinating and productive period: the promising experiments with plastic form upon which Rozhdestvensky embarked in the 1930s saw no continuation. Indeed, Rozhdestvensky's painting career was comparatively short. He was active as a painter between 1923 and 1936, turning subsequently to exhibition design. His very first endeavour in this area, the Paris World Exhibition of 1937, which Rozhdestvensky worked on under Nikolai Suetin's management, brought him wide acclaim. His fame was sealed by his subsequent design for the New York exhibition of 1939. Rozhdestvensky continued to work in this area until the 1980s: the "Moscow-Paris” exhibition of 1981 was one of his last projects. Highly successful as an exhibition designer, Rozhdestvensky was no longer known as a painter: his early work under Malevich was all but forgotten. He became a famous specialist in Soviet exhibition design, an Academician and People's Artist of the Russian Republic, yet his early painting was, for many years, erased from the history of Russian art.

The current personal exhibition aims to redress the balance by showcasing, for the first time, Rozhdestvensky's entire artistic career, from his earliest paintings, through the diverse practical and theoretical lessons received from Kazimir Malevich at the State Institute for Art Culture (Ginkhuk), to the artist's independent efforts in painting from the 1930s. Rozhdestvensky's early period is most fully represented, but drawings and paintings from subsequent decades are also shown, including works from the 1980s in which the artist revisited many of his earlier topics and aims. Viewers will also find photographs of many of Rozhdestvensky's most famous exhibition projects.

Born in Tomsk, Konstantin Rozhdestvensky commenced his art studies in his hometown: between 1919 and 1922, he was a student at M.M.Poliakov's private studio and the art studio attached to the Tomsk House of Education. His teachers could not fail to notice the boy's talent, and in September 1923, he was sent to Petrograd to study. There, he succeeded in entering the Museum of Art Culture, subsequently the State Institute for Art Culture (Ginkhuk) and, at the age of seventeen, became a pupil of Kazimir Malevich. His study with the great master sealed his fate - years later, Rozhdestvensky would stress the vital importance of Malevich's teaching. Guided by him, the young artist learned to understand the logic and laws governing the development of form and to analyse the various aspects of art.

Rozhdestvensky's work from the 1920s reflects Malevich's pedagogical programme, which was based on the practical study of the main "systems” in contemporary art: Impressionism, Cezannism, Cubism, Futurism and Suprematism.

Rozhdestvensky's first year at Ginkhuk (1923-1924) was devoted to the practical and theoretical study of Impressionism. The following year, Malevich instructed the young artist to turn his attention to Cezanne, which Rozhdestvensky duly did, becoming an expert on the painter in a short space of time. Receiving recognition as a specialist, he began to lecture on Cezanne, leading seminars and producing papers and articles which were consistently well-written, accurate and informative. Noting his success, Malevich commented on Rozhdestvensky's "considerable talent for analysing works of art”. Art studies, claimed Malevich, "were in great need of precisely such a learned artist”', and would, in time, greatly benefit from this contribution.

An important place in Rozhdestvensky's art is occupied by Suprematism. Although, as the artist himself admitted, he did not create any paintings in this style, a number of his Suprematist drawings survive. Rozhdestvensky saw Suprematism as the expression of cosmic space - like Malevich, he "felt this concept heralded a new reality - one which transcends our earthly, material existence, promising instead a world of spiritual values and dimensions.”2

The late 1920s and early 1930s proved to be Rozhdestvensky's most successful period in terms of painting. Following Malevich, the artist turned to the peasant theme, creating series of canvases in such broad, generalised style that they are almost symbolist ("The Moujiks”, "Three Female Figures”, "A Family in a Field” and others). Certain of Rozhdestvensky's works of this period combine post-Suprematism with elements of the classical tradition, recalling Venetsianov's school of painting.

Adhering to Malevich's general approach in composition, Rozhdestvensky also strove for his own, original solutions in colour and composition. His heads of bearded moujiks with their disproportionately long necks and frozen expressions produce a strange, disquieting impression. The intense oranges and yellows typical of Rozhdestvensky's work of the early 1930s serve to heighten the emotional tension. As the artist himself recalled, this new palette was born of his impressions of Siberia: "It was the magnificent Siberian sunsets, bathed in light; the red-haired peasant moujiks of Siberia; ... the domes of churches, gleaming gold against the thick Siberian forests.”3

Rozhdestvensky's images of peasant women, arms outstretched and interlinked as in a khorovod dance, were well-suited to contemporary ethos. The bright, open and intense colour of these paintings is balanced by harsh, silhouetted forms. This series, "The Three Udarnitsy [Women Shock Workers]”, was important to Rozhdestvensky with his search for universal, plastic form which was at once classical and modern. As a young man, Rozhdestvensky had formulated the artist's task in his diary thus: "Modernity and eternal beauty. The connection.”

Following the closure of Ginkhuk, Rozhdestvensky worked with Malevich at the Institute of Decorative Art and State Institute for the History of the Arts. Although no longer officially a pupil of Malevich, he continued to consider him the greatest authority on art. At that time, Rozhdestvensky was not so much in need of a group leader as of a strong, creative personality who would save him from "inner stagnation”, as Lev Yudin put it. Thus, the bond between the two was not broken. Rozhdestvensky sat for what would become one of the great master's last painted portraits (viewers can admire this at the exhibition). Along with other pupils, Konstantin Rozhdestvensky was with his teacher until the very last: a photograph taken shortly before Malevich's death shows Rozhdestvensky at the dying artist's bedside.

The author of many fascinating design projects, Konstantin Ivanovich Rozhdestvensky lived a long and busy life, travelling to many countries with his exhibitions. An outstanding personality who knew Pablo Picasso, Fernand Leger, Aristide Maillol, Giorgio De Chirico and other eminent artists, Rozhdestvensky nevertheless felt unfulfilled. His artistic talent and astuteness as an art critic and researcher, which Malevich had noted and nurtured, proved ill-suited to the times in which he lived. With bitter sadness, the artist spoke of his failure to find creative self-fulfilment.

In the final years of his life, Rozhdestvensky would often recall his first endeavours as an artist, and the time spent with Malevich. In his late drawings and paintings he frequently turned to the problems and themes addressed in his earlier work: we see peasant women with sheaves, Siberian moujiks, "two spaces”, Suprematist landscapes and Cubist compositions. "The most rich and fascinating layer which has fed me throughout my entire life,” wrote the elderly Rozhdestvensky to friends, "proved to be the time of our youthful hopes ... when Kazimir was with us.”4 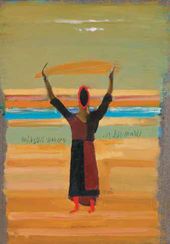 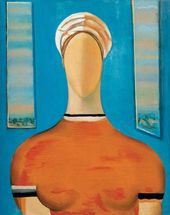 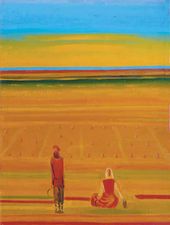 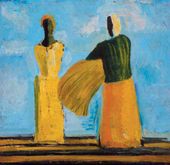 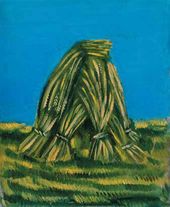 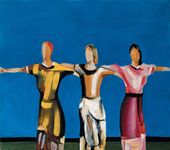 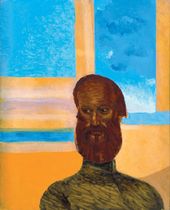