The 20th century and, in particular, its first half was the time of "-isms” (Fauvism, Expressionism, Cubism, Futurism, Rayonism (Luchizm), Constructivism, Suprematism, Dadaism, Abstractionism, Neo-plasticism, Surrealism), through which the artistic spirit was expressed into means that were different, and sometimes contradictory in their natures.

Italy made its contribution to such early revolutionary changes, presenting to the world an unusual avant-garde expressive line - Futurism, which, both in line with French Cubism and in contrast to it, started influencing other trends, such as Russian Cubo-futurism and Luchism, as well as Dadaism (an excessive and over-exaggerated manifestation of Cubo-futurism and Luchizm), and spread in countries which were very distant from Europe both geographically and culturally - for example, in Japan.

Moreover, Italian creativity manifested itself in expressive and abstract stylistics, but this creativity is particularly noticeable through its emphasized attention on an unique individual manner, characterized by reflection, as, for example, in the works by the artists of the "Novecento” group (20th century) - which was part of the large European movement called "Return to Order” - or in the metaphysical paintings of Giorgio De Chirico.

In the second half of the 20th century, at a time of profound transformations in the national economy which turned the country from an agricultureintensive to an industry-intensive one, with all the consequent cultural and social changes, Italy's participation in Neo-avant-gardism and in the international development of the artistic and plastic expressive manner became more comprehensive and significant, in terms of quality.

In the very centre of events was an area which could boast neither territorial, nor demographic significance (only 10,000 square kilometers and 1.5 million inhabitants) - the region of Marche, spread against a background of mountain chains stretching to the west, among dazzling hills and valleys in its central part, and facing the coast of the Adriatic sea in the east. This is an area which for many centuries had made an outstanding contribution to the development of art, in painting, sculpture and engraving at all levels: national, European and international. It is linked to the names of at least seven remarkable creative figures. However, I would particularly like to mention three great artists of the 16th century: Raphael, Donato Bramante and Lorenzo Lotto - the first two were born in Marche and the third lived in Marche until the end of his life.

As we can see, this curious peculiarity of the region has very old roots, but it gained a special reputation in the 20th century, when the number of talented artists recognized at national and international levels became really appreciable.

I believe that there are two reasons for this phenomenon: the first one is related to the region's unique landscape, and the second to some specific features of the local economy which have characterized this territory for centuries - in other words, its agriculture and crafts. As already mentioned, the local landscapes enchant visitors with their beauty, with moderate highlands crossed by twisting hills reminiscent of a woman's body (their outlines look similar to female breasts and hips), which reach the sea, and, in their turn, dominate over green or blooming valleys famous for their fertility thanks to a vast network of irrigation canals. Humankind has given its love to this land, transforming the hills into coloured geometrical figures decorating the surroundings of coastal settlements. These settlements are nowadays closely linked to the second most important fishing harbour of Italy, San Benedetto del Tronto, a coastal town in the south of the Marche region. It is not surprising that locals who contemplate these beautiful, graceful landscapes every day, gradually acquire a capacity for aesthetic perception of the world around them and a desire to reproduce and create that sense of beauty.

The second set of reasons which have led to the dynamic development of art in this territory is connected with the fact that Marche's inhabitants possess the sense of creation that the ancient Greeks used to call "poesis”. A true, deep-rooted religion of labour, based on the notions of "work” and "work well-done” is a typical characteristic of the local population. Thus, work viewed as manual labour (for centuries, agriculture and crafts occupied the leading positions in the economy, and they were based on manual labour; nowadays, crafts and industry dominate the economy but at the same time it still remains considerably agricultural) enriched by a profound understanding of beauty, gave birth to a phenomenon - mysterious in many respects - that displayed itself in man at the moment he turned from an anthropoid ape into a human being, even in the most primitive form. That is what we usually call "art”. Here we could also speak of creativity, inventiveness and imagination that have become noticeable, thanks to a high level of handicraft. (It is no accident that today, with the development of industrial society, the inhabitants of the Marche region have complemented art with design - in other words, an aesthetic design of large-scale production - in which Marche natives excel other regions in Italy as well as in the whole wider world. That is what constitutes the value of "made in Italy”, although in fact we should be saying "made in Marche”: it is particularly true for furniture, shoes and many other industries.)

These typical features mentioned - which could be called a gift of fortune or a manifestation of divine generosity - led to the situation when Italian art, having, as noticed, much in common with European and Western art, found its exact reflection in what is created by artists of Marche who are divided into three categories. There are those born and living in Marche, those born in Marche who later left the area, and those who, even though not born in the region of Marche (either Italians or foreigners), chose to live here and considered the area an ideal place for their existence and creative activity. All of that becomes obvious thanks to the exhibition "Italian Art of the 20th Century: Eminent Artists of the Marche region” which I conceived and organized. The exhibition is taking place under the patronage of the Russian Academy of Arts, running from November 23 2006 to February 13 2007, before moving to the capital of the Marche region - Ancona in the centre of Italy, on the coast of the Adriatic sea, across from the former Yugoslavia.

97 paintings by 35 artists represent the history of virtually all Italian art (and, to some extent, European art as well), starting with the national variant of the European movement Art Nouveau, the so-called Liberty, which linked the end of the 19th century with the beginning of the 20th century and was implemented in the art of Adolfo De Carolis who was born in 1878 and died in 1928. After that came the heyday of the multifaceted and emotionally striking Expressionism which was widely represented by the exquisite Gino Bonichi (Scipione) who lived only 29 years and died in 1933, and also by other examples of the convergence of Mediterranean traditions with the outstanding avant-garde movement, born in Germany, represented in the works of Luigi Bartolini, Orfeo Tamburi, Pericle Fazzini, Arnoldo Ciarrocchi, Attilio Alfieri and Corrado Cagli.

Futurism - an avant-garde trend which originated in Italy in 1910 - is represented by Ivo Pannaggi (after moving to the north of Italy this futurist surrendered to the charms of the Bauhaus and Russian Constructivism), Sante Monachesi and the sculptor Umberto Peschi. A period of stagnation in the development of European art, intensified by the avant-garde trends united under the name "Return to Order”, is witnessed in the work of the artist Anselmo Bucci (the founder of the Italian group "Novecento” - part of the "Return to Order” movement), the sculptor Quirino Ruggeri and, to some extent, Mario Tozzi with his metaphysical artistic point of view.

Abstractionists' ideas (meaning an Abstractionism that at times could be lyrical or geometrical, or sometimes informally material) were expressed by Osvaldo Licini (the artist who won an impressive victory at the International Biennale of Art in Venice in 1958), Walter Valentini, Alfio Castelli, Nanni Valentini, Giuseppe Uncini, Franco Giuli, Fulvio Ligi, Edgardo Mannucci (who prompted informal hypotheses to the most famous Alberto Burri), Eliseo Mattiacci, Arnaldo Pomodoro, Gio Pomodoro and Loreno Sguanci.

The conceptual art trend (from the second half of the 1960s and the 1970s) is represented by Gino De Dominicis with his anxious striving to reach the impossible (such as immortality or the ability to fly), and by other unique and outstanding figures, interpreted by all of them in their own ways, among them Gino Marotta, Valeriano Trubbiani and Giuliano Vangi.

And, finally, the exhibition represents two other directions of the artistic search that marked the end of the 20th century (they have not lost their significance in the 21st century - at least at its beginning). The first - "quotations from the past” - tries to reproduce, or "to quote” the works of art, created in accordance with the great traditions of past centuries, by conveying their characteristic narrative manner and emotional effect: the representatives of this trend are Ubaldo Bartolini, Bruno d'Arcevia and Floriano Ippoliti. The second, on the contrary, instead of traditional brush work uses state-of-the-art representation technologies - such as electronic media - to convey in the most dynamic way the endless emotional excitement that is the eternal basis of art and its expressive means. 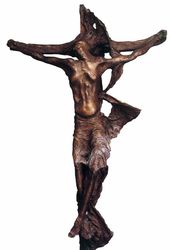 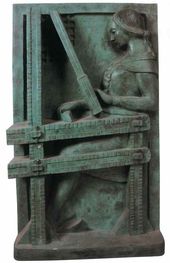 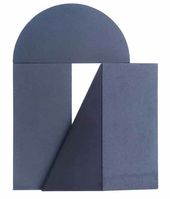 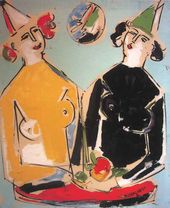 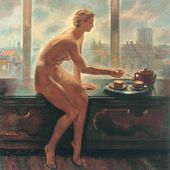 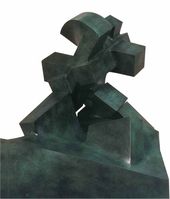 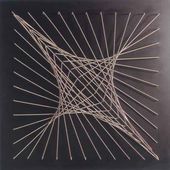 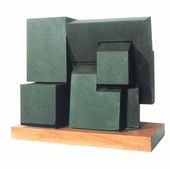