In 2004 the State History, Architecture and ArtVIadimir-Suzdal Museum-Reserve celebrated its 150th anniversary, and thus is one of the oldest and largest museum associations in Russia. it includes the most significant art coilections and monuments of Viadimir, Suzdal, Bogolyubov, Kideksha and Gus Khrustatny, the association incorporates 40 separate museum locations and 55 architectural monuments, nine of which are mentioned in UNESCO's World Heritage list. All these make the Vladimir-Suzdal Museum-Reserve a real attraction for tourists from Russia and abroad - a pearl of Russia's Golden Ring, visited every year by more than one million tourists from more than twenty countries. 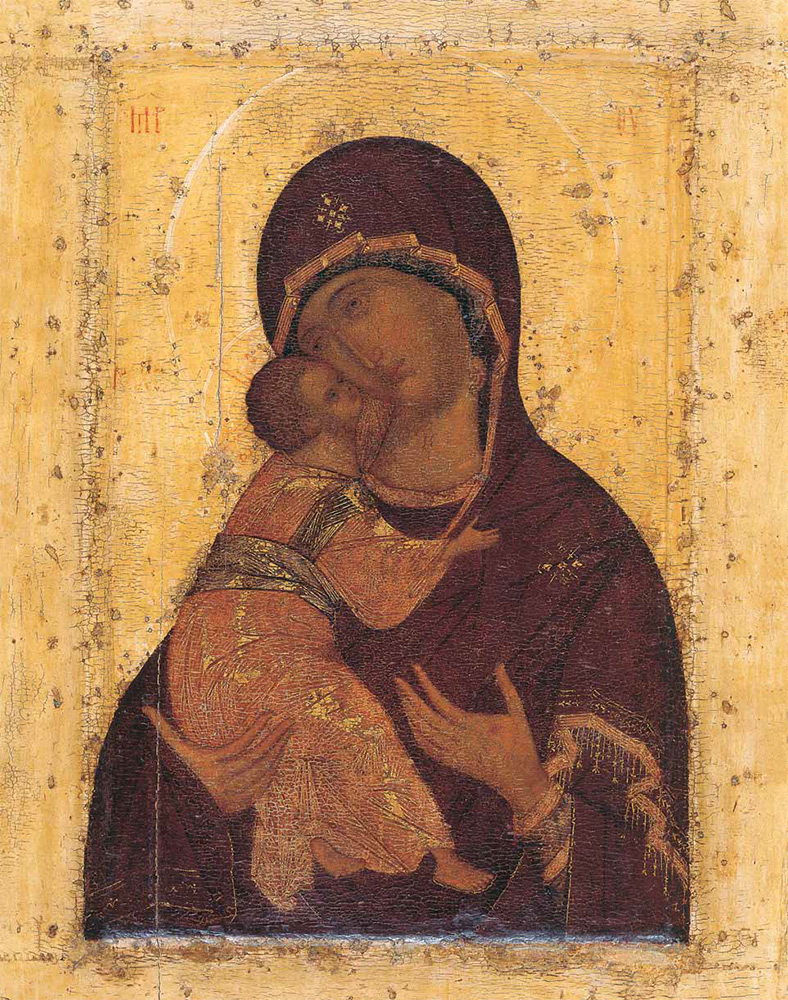 The area of Vladimir and Suzdal was a major centre of historical and cultural development in Russia in the Middle Ages. The Vladimir princes for a considerable period were leaders in Russia's political and religious life. In the 14th century, when the foundation of Russian statehood was established, the Moscow kingdom's strengthening and expansion to the North-East started with the Vladimir princedom. The church of St. Boris and St. Gleb in Kideksha, the "Golden Gates", the Church of the Assumption, and the St. Demetrius Church in Vladimir - to name a few - are among the unique monuments of religious art of Vladimir and Suzdal. The frescoes and icons of the iconostasis of the Church of the Assumption are priceless Russian art monuments, painted by Andrei Rublev and his older friend Daniil Chorny.

The museum in Vladimir was founded in 1854 under the Vladimir Statistical Committee. Its original collection included a number of works gathered by the Vladimir Gubernia Scientific and Archival Commission, which worked from the late 1890s to 1917. After the Revolution the monasteries and churches of Vladimir and its surrounding cities were closed, and icons and other artworks from them were transferred to the museum. These included some pieces from the Religion and History Depositary of the Brotherhood of Alexander Nevsky in Vladimir.

The Suzdal Museum opened in 1923, with its artistic collection based predominantly on assets from the closed monasteries and the city's churches.

The collections of the museums in Vladimir and Suzdal merged into a unified museum centre in 1958, together forming the State History, Architecture and Art Vladimir-Suzdal Museum-Reserve. In 1961-1962 the ethnographical museums of Alexandrov and Mstyora joined the complex. The merging of collections of these museums laid the foundation for the great collection of ancient Russian painting that was later expanded by the findings of expeditions through the Vladimir region and works acquired from private collectors. 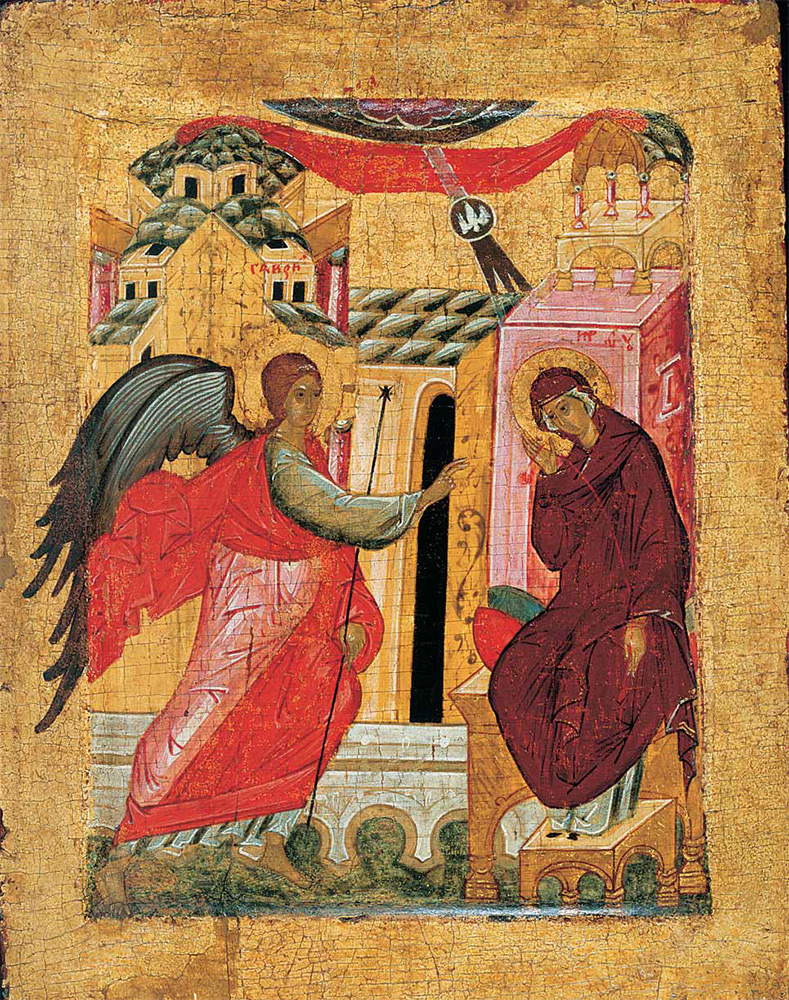 There are over 2,000 works of old and modern Russian painting in the Vladimir and Suzdal Museum-Reserve. The story of these works is closely connected with certain stages of the history of the museum itself: in 1854, the altruistic work of enthusiasts and admirers of local history like K.N. Tikhonravov, I.A. Golyshev, N.G. Dobrynkin and N.A. Artleben helped to create the Museum of Natural and Hand-Made Works of the Vladimir Gubernia. In 1901, with the support of the Vladimir Gubernia Scientific and Archival Commission and many private donations, a new two-storey building designed by the city architect P.G. Begen was built for the museum, where the exhibition was relocated: on June 17 1906 it was opened to the public. 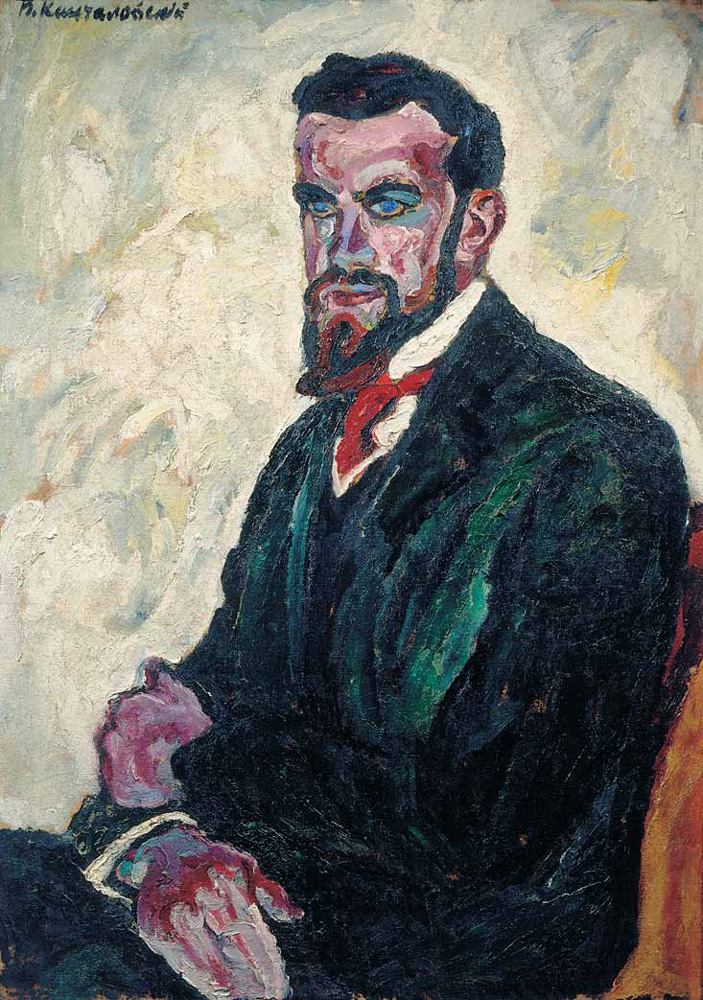 In 1914, in the will of the landowner V.N. Akinov, portraits of his relatives from three Vladimir generations were bequeathed to the museum.

In 1917 the Vladimir Gubernia Scientific and Archival Commission ceased to exist, and in May 1918 the museum came under the protection of the Vladimir Committee for Museums and Monument Preservation. The nationalised artworks from deserted mansions of former landowners became the main source for the museum's new acquisitions. The greater number of pictures were brought from the Andreyevskoye estate of the Vorontsov-Dashkovs and the Fetinino estate of the Zubov counts. In the following ten years the collection was complemented with pictures from the State Museum Fund.

There are many pictures by local artists including V.Ya. Yukin, K.N. Britov, and others. Working in the 1960s, they are considered the founders of what is known as the "Vladimir landscape" school. Highly lyrical, with a rare native attitude full of air and light, these pictures became a remarkable phenomenon of exhibitions of the 1950-60s.

The Museum in Gus Khrustalny is a subsidiary of the Vladimir and Suzdal Museum-Reserve. In the late 18th century Akim Maltsev established near the river Gus in the Vladimir Gubernia one of the first glass factories in Russia. Maltsev crystal has always been very popular, and finally in the late 19th century the enterprise received international acclaim. The museum's exhibition showcases one of the richest collections of Russian glass artworks and is located in the magnificent St. George Cathedral designed by L.N. Benois, built in 1903.

There are more than 436 exhibits in the art collection of the Vladimir and Suzdal Museum- Reserve: among them are archaeological findings and coin collections; 13th-20th century iconography; ancient and modern examples of Russian visual arts; famous lacquer miniature works by Mstyora artists; glass artworks and porcelain; ancient scriptures and books from the 15th- 20th centuries; and artefacts of everyday life in ancient Russia. 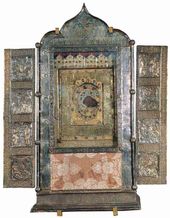 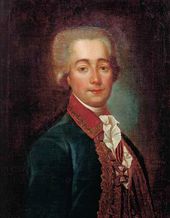 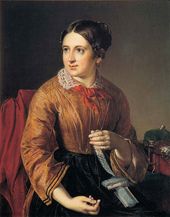 Vasily TROPININ. Sewing Insertions. 1830s
Variant of the painting of the same name (1830) held in a private collection in Moscow. Oil on canvas. 79 by 62 cm 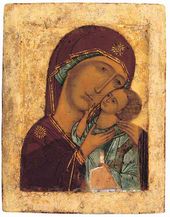 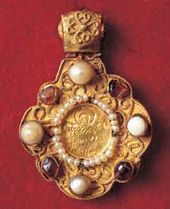 Veil over the Tomb of Yevrosinya of Suzdal. 1526–1542
Suzdal Convent of the Holy Veil Studio of Solomonia Saburova. Textile, silver, silk and wool embroidery, canvas. 190 by 76 cm 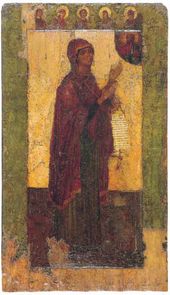 Our Lady of Maximov. 1299. Byzantium (?)
Levcas and tempera on wood.165 by 66,3
According to legend the icon was painted on the order of Metropolitan Maxim in commemoration of the transfer of the metropolitan seat in 1299 from Kiev to Vladimir 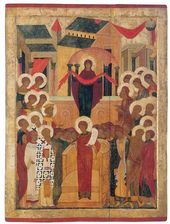