The idea of writing these notes came up in anticipation of the "In the Russian tradition exhibition, due to open at the Smithsonian Institute in Washington, DC in December 2004. The collection to be shown in Washington and later in Minneapolis, at the Museum of Russian Art (TMORA), features Russian paintings from the period of 1900 through to the 1970s, from both the Tretyakov Gallery in Moscow and the Minneapolis collection.

The show presents about 50 works of leading painters whose names constitute the glory of Russian art, among them such masterpieces as "Mika Morozov" by Valentin Serov, "Portrait of the Composer Modest Musorgsky" by Ilya Repin, "The Bathing of a Red Horse" by Kuzma Petrov-Vodkin, as well as paintings by Alexander Deineka, Yury Pimenov, by members of the Bubnovy Valet, the "Jack of Diamonds" group, by Sergei Gerasimov, Vasily Nechitailo, Viktor Popkov, Tair Salakhov, Alexei and Sergei Tkachev, Gelii Korzhev and many others. 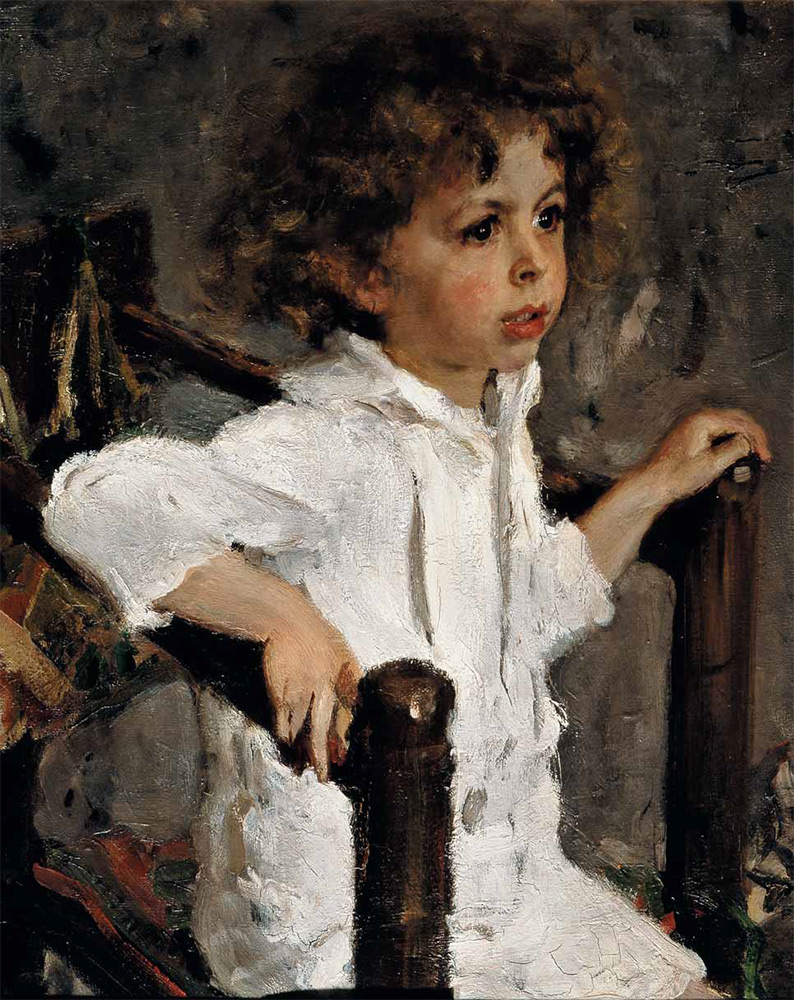 The show is a major opportunity to look at 20th-century Russian painting without reckoning with the bidding of the art-market or the limits of political ideology. It has been designed to portray the 20th century as an unbroken stream of everyday life seen through the eyes of distinguished Russian artists who managed to pinpoint the fragility of the transient moment of human life.

As is often the case, we may, involuntarily, become "captured" by a work of art because it corresponds to our interest in its historical and cultural background. In other words, we seek a contact with the realities of a past historical time through the aesthetic implications of a painting that bears traits of that time. This is the most likely way that foreign viewers commonly find clues to understanding the Russian figurative arts.

For people in the West, mysterious Russia with its vast territories, immense wilderness, historical cataclysms and latent capacities has always been a matter of interest and investigation.

Russian cultural heritage of the 20th century, and of its last decades in particular, has more than once been at the centre of attention of the international community recently. Moreover, Russian art has at times appeared to be a kind of "fashion". Soviet-era Russian art has seen at least two peaks of popularity in recent years. The first referred to the fashion for Revolution-incited avant-garde art; that was the time of the striking discoveries of Vasily Kandinsky, Kazimir Malevich, Vladimir Tatlin and others which overwhelmed the public with their unusual aura, seemingly symbolic of a colossal social cataclysm that dramatically changed the established world order.

Initiated by the Tretyakov Gallery, "In the Russian Tradition" is perhaps one of the first attempts to avoid politics in the presentation of the Russian figurative arts. Thus, there will be no pictures with ideologically-motivated subjects: it used to be exactly such a politically-oriented ideological commitment that played the decisive role in the appreciation of art by both Soviet officials and dissident-minded intellectuals. The present exhibition rather focuses on values of fundamental and eternal significance: man, his personal assets and emotions, against the classical surroundings of a landscape and the visual attributes of life. Stated differently, the pictures to be exhibited depict life as an entity, as an uninterrupted flow of everyday events that no turn of political whimsy can disrupt.

Such an exhibition also offers a good opportunity to demonstrate the definitive distinctions of the Russian school of painting, which managed to remain inviolate and working even in the most difficult periods of national art history, as well as to confirm certain unchanging aesthetic criteria, and a perfect marriage of tradition and innovation of which the Russian arts can be proud.

For American audiences whose interest in Russian culture is more highbrow, "In the Russian Tradition" offers a deeper insight into the artistic processes and undercurrents manifested in Russian painting starting from the late 1890s through the next seven decades of the 20th century. It can only be an exciting and fruitful journey. 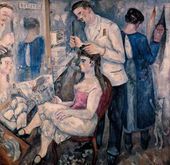 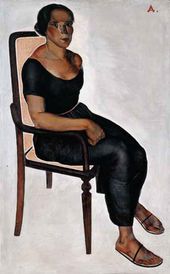 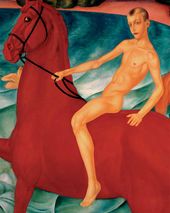 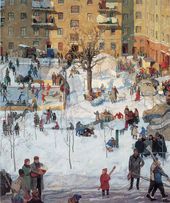 Igor POPOV. Our Courtyard. 1964
Oil on canvas. 189 by 163 cm
From a private American collection
Loan arranged by The Museum of Russian Art
Minneapolis, USA