Named after a painting created by the artist in 1953, the major Chagall retrospective exhibition "Bonjour, Patrie!" will run at the Tretyakov Gallery between 25 February and 29 May 2005.

In his book "Moya Zhizn” (My Life), Chagall enquires bitterly why it was that in Russia he always felt like “a fifth wheel on a cart”[1]. "Neither Tsarist, nor Soviet Russia ever had any need for me. They do not understand me, I am a stranger to them,”[2] the artist wrote. He himself never became estranged from his homeland, which he continued to call Russia despite the political changes which took place there. In a letter to a friend written in 1935, while travelling in Poland and Lithuania, Chagall admitted touchingly: "I travelled to Poland and Vilno... in order to reach the outskirts of my little town and to tell it that I still love it even though it doesn't love me, .and then to leave without even entering it.”[3]

"In time, perhaps, Europe and my Russia will come to love me,”[4] Chagall said once. His dream was destined to come true: 20th- century European and, indeed, world art would be incomplete without Chagall. His role in the culture of his homeland, as well as in the wider world, is now coming to be understood both in Russia and in his homeland, Belarus, in Minsk and Vitebsk[5].

"Perhaps my Homelands exist solely in my canvases?”[6] Chagall wrote dejectedly to Joseph Opatashu in the year that he became a French citizen. At the time, it seemed to him that there would never be any interest in his art in the Soviet Union.

Now, the time has finally come to pay tribute to the artist7. Chagall very much wanted his works to be shown in Russia, and Russian museums and art galleries have always cherished his unique early paintings. It is fitting that a large and comprehensive exhibition of his work will finally take place in this country.

Many of Chagall's paintings have never before been shown in Russia. The forthcoming exhibition will be a unique opportunity to view an extensive selection of this great 20th-century artist's legacy, from the early Vitebsk canvases to the world- famous masterpieces of his French period[8].

"The man spent his whole life painting. Painting was his life,” Louis Aragon wrote about Chagall[9]. The painter's relationship with contemporary art was, nonetheless, complex and ambiguous. While showing an interest in new developments and experimenting with different forms and styles of art, Chagall never fully adhered to any existing aesthetic school, creating instead his own system of human and artistic values. Strange as it may seem, he claimed that, artistically, he felt closest of all to Charlie Chaplin.

In one of his interviews, Chagall explained: "What Chaplin is trying to do in cinema, I am trying to do in painting. He is undoubtedly the only artist in existence with whom I have a complete and total understanding. We understand each other without words.”[10] Much can be gleaned from this admission: the two not only shared a love for circus and theatre, clowns and dancers, beautiful flower-girls and wonderful blooms. Chagall, like Chaplin, likes parables. Like Chaplin, he understands and loves the "little man”, is sensitive towards his feelings and does his best to protect him from the unkind blows of Fate. Like Chaplin, he can see how dictators are born. Both believed that "Man is the measure of all things”, so, for both, "Know thyself” was a paramount principle.

Like Chaplin, Chagall stands out among his contemporaries. This is perhaps due to the fact that, unlike many, he was constantly aware of and stressed the importance for an artist of profound reflection on personal experience. In his paintings, his own private and artistic life becomes a measure of emotional suffering, of retrospection - a standard of sorts, a starting point. "La Vie” (Life) (1964), with its shifting rhythms and the artist's choice and interpretation of events and characters, symbols and objects, is akin to a play - a dramatic performance. Indeed, Shakespeare's "All the world's a stage” comes to mind.

Chagall's unique position among 20th- century artists is perhaps also due to the fact that his artistic vision was not forwardlooking. In this, he differed from both modernists and traditionalists. He was not attempting to create a Utopia - he was merely dreaming, and his dream, his bright and beautiful vision was a vision not of the future, but of the present.[11]

In creating his canvases, Chagall turned his gaze inwards. Studying that which lay within him, he found love, those dearest to his heart and himself the artist, himself in art.

Gazing upwards, he again encountered Love - Love and the Heavens themselves, from which the divine biblical subjects descended. Looking back, he observed the course of history, his own path from Vitebsk to Vence, the whole world through the prism of his selfawareness as a Russian-born Jew, a citizen of the world, a creature of God.

Throughout his life, Chagall remained exceptionally aware of his development as artist and human being. His constant observations on his own thoughts, feelings and memories, as well as the people he encountered and the places he visited are well-documented in the artistic diary of his life. Spanning 75 years between 1910 and 1985, this diary consists of Chagall's paintings. It is hardly surprising that many of his characters remind us of the artist himself. Da Vinci himself felt that "every trait of a painting reflects the nature of its creator", and that "the majority of the faces tend to resemble the artist... And if the soul encounters one who resembles the body it has created for itself, it rejoices and falls in love with him."[12] Chagall, indeed, both rejoiced and fell in love.

"Chagall's great talent, his intuitive genius lies in the fact that by questioning himself, he succeeded in placing the artist's personality, thoughts and sensations at the centre of his work," feels Jean-Michel Foray, director of the Nice National Museum of the Marc Chagall Biblical Message[13].

"I like contrasts that possess a hidden harmony,"[14] claimed Chagall.

The forthcoming exhibition is a chance for dedicated viewers to immerse themselves in the colourful pages of Chagall's artistic autobiography created over a period of 75 years. Visitors may get a sense of the harmony of the individual and the universal which the artist discovered and built on over a period of decades. For many lovers of Chagall's work, this sense is a constant solace, an aid in their search for eternal human values.

All Chagall's works are painted in the first person. At the same time, he almost always allows the viewer to interpret his paintings for himself. This is true both of the monumental canvases and of the smaller sketches. Chagall's paintings are operas on canvas, with whimsical, fantastic plots and complex scores: the narrator always has a part, yet the polyphony allows everyone to become involved in the action, to share the artist's emotions and reflect with him. Chagall offers no quick and easy solutions to life's problems; neither does he impose his own ideas on the viewer. He even appears to regard his chosen image of artist and Messiah with a certain irony.

Indeed, this image is not always evident in his paintings. Sometimes, Chagall likes to play "find the artist". Nonetheless, openly or indirectly, the artist is present in each and every canvas: using his own system of pictorial communication, he brings the content of his work to the viewer. For, if the artist is indeed a messiah, all things are connected with him. In his work, all things are reflected, and those who have faith in him will find both truth and prophecy in his art. Some of Chagall's paintings show Christ or a winged angel holding a palette and brush, and the artist crucified. These images are among Chagall's symbols of faith; he could be said to be a "natural symbolist", using symbols as a poet uses words to compose his message. The message is like a magical well: all people draw from it, what they will. Some find milk, whilst others get water - holy water, on occasion; some choose wine, whilst others prefer something kosher. All those who approach are invited to drink their fill. Chagall allows viewers to interpret his message as they wish, letting them choose at what level to engage with what they see.

Telling his story, the artist is patient and prepared to go over every detail time and time again. Aware of his responsibility and his noble mission as an artist, he burns with a passionate desire to help humanity comprehend the essence of human and divine Love. In this wish he is as sincere, innocent and direct as a child.

For Chagall, love is the key which unites all things. Love lies at the centre of his biblical "message". As an illustrator of the bible, Chagall was unequalled among 20th-century artists. Even if that were his only legacy, he would still be considered among the greatest artists of his time. The work he produced to accompany the Holy Scriptures goes beyond mere illustration: of all his contemporaries, he was best able to put pictures to words to express the essence of the holy book.

"I love to talk about Love," Chagall exclaimed at the opening of an exhibition of his paintings in the Tretyakov Gallery in 1973. Today, the Tretyakov is delighted to invite this wonderful artist to talk to us about love once again - in his own, inimitable way.

Afternote: the State Russian Museum has recently expressed an interest in presenting this exhibition after it leaves the Tretyakov Gallery. 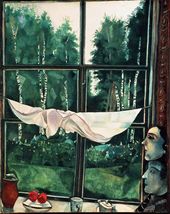 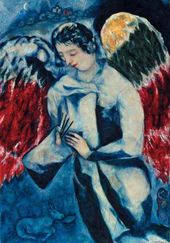 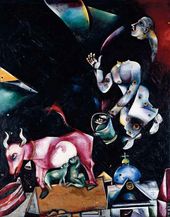 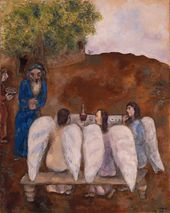 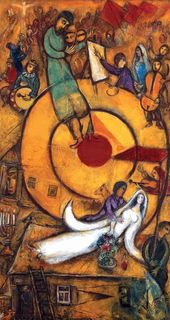 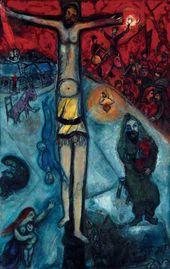 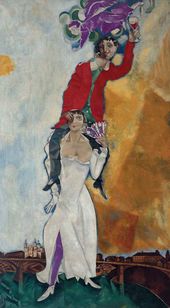