The First Ten Years of the Museum of Private Collections

The holdings of almost every famous international museum have been formed on the basis of private collections. Through the second half of the 19th century - the period in which state museums were "born" - private collections were "dissolved" into larger academic museum exhibitions, a dominant tendency which seemed only natural at the time. Following Russia's 1917 revolution, the tendency was only enhanced, receiving a new and powerful impulse. Private collections were broken up and absorbed by the State Museum Fund; thus, particular collections became an integral parts of others. Even if an individual collection was preserved in its entirety in a museum it was in some way adjusted for the sake of some principle of "higher order". 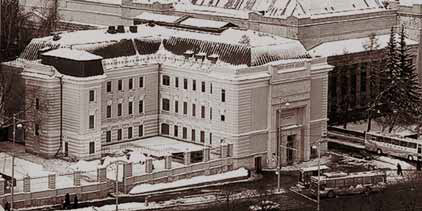 View of the Museum of Private Collections

The foundation of the Museum of Private Collections in Moscow in 1994 radically changed the situation. The very existence of such a museum, made up exclusively of collections of art gathered by one person or one family, complicates the work of art historians and critics investigating private collecting. What makes a collection - paintings, interior decorations, or other artefacts? Or the collector's spiritual and creative activity? 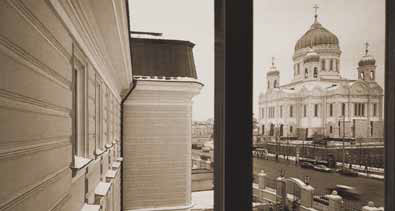 Of course, it is a happy marriage of both, and even more. The collection achieves an integral "oneness" with its collector, becomes the collector's microcosm, the realized model of an individual's personal and private perception of art, a special aspect of reconsideration of human history and culture. It is the collector who puts togther all the pieces, following some principle known to him or her (and only to that individual), building something that will later become meaningful. This meaning is somehow incorporated in the collection as a potential, an option.

This is no apology for the concept of the private collection as such, nor a diatribe against the national museums, whose collections are assembled along the same lines as the private collections - but their aims, methods and means are different. The main difference lies in the fact that state museums claim to adher to universal, all-embracing and objective principles in building up their funds.

Thus, any collection is no more than something concrete, a collection of objects and artefacts. The creative approach of a private collector can be seen in the very system of collecting: it is highly individual, personal, special and - undoubtedly - private. When a collection is taken away, separated and detached from its collector (particularly in the case of transfer to ordinary art museums), it dies; it ceases to exist as a whole - its very nucleus, the organization of material and structural ties, all are broken up. This is neither bad nor good, but rather inevitable.

The result is very different in the Museum of Private Collections: the viewer receives every opportunity to communicate with the collection as a whole, observing it as it was formed by its owner. Although the Museum cannot actually recreate the living atmosphere of the collector's home, it does its best to try to do so.

The founding idea behind the Museum of Private Collections belonged to Ilya Silberstein (1905-1988), a doctor of arts criticism and editor-in chief of "Literaturnoye Naslediye" (Literature Heritage), who was himself an ambitious collector. He desired that his collection of Russian and European painting and graphic art - comprising more than 2,000 works in all - be passed to a state museum with the condition that it should remain integral and undivided, be kept in one place and be on permanent exhibition with accompanying attribution to the collector. The idea was discussed in the middle of the 1980s, but there was then no museum able to fulfill all of Silber- stein's conditions. Thanks to the titanic efforts of Silberstein and Irina Antonova, director of the Pushkin Fine Arts Museum, the decision was taken to open such a museum - a museum of priv-ate collections - in a building adjoining the Pushkin Fine Arts Museum (the former Golytsyn mansion) which would become the future home of the museum. It took almost seven years to restore and completely reconstruct the property. In January 1994 the Museum opened its doors to the public; it can only be regretted that Ilya Silberstein himself did not witness the opening of the museum of which he had dreamed.

At its opening, the Museum had 19 collections, not counting some small donations of two or three works. Today there are some 27 collections of Russian and European art from the 1 6th-20th centuries, including painting, sculpture, and graphic art and applied art. The diverse gifts concerned range from ancient Russian icons to the works of key Russian avant-garde artists - Natalia Goncharova, David Shternberg, Alexander Rodchenko and Varvara Stepanova. The Museum received Tatyana Mavrina's invaluable collection of ancient Russian icons and folk art, as well as works by the artist herself, alongside Fedor and Ekaterina Lemkuls' unique collection of West European and Russian glasswork.

The collection of works by Alexander Rodchenko (1891-1956) and Varvara Stepanova (1894-1958) exhibited in the Museum is the largest in the world. It was donated to the Museum in 1992 by the Rodchenko-Lavrentiev family, who had carefully treasured that heritage of painting, graphic art, photography and applied art.

Russians living abroad were also very enthusiastic about the idea of founding the Museum of Private Collections. Silberstein never missed an opportunity to meet representatives of Russian culture and speak to them about the Museum on each of his foreign trips. Nikita Lobanov-Rostovsky, a personal friend of Silberstein, was the first to respond.

The son of Dmitry Lobanov-Rostovsky and Irina Vyrubova, Nikita Lobanov-Rostovsky was born in 1935 in Bulgaria into a family of famous Russian princes. After World War II he made a daring escape from Bulgaria, moving in 1961 to the USA, then living in London from 1980.

Nikita Lobanov-Rostovsky was a leading expert on economics and banking, and an adviser to the De Beers diamond company. Alongside his business activity, he was a director of the Association of Theatrical Museums in London, a member of the board of the Metropolitan Museum in New York, and the Institute of Modern Russian Culture in Los Angeles, to name just a few such institutions.

In the early 1960s Nikita Lobanov-Rostovsky and his wife Nina began collecting Russian theatrical designs from the turn of the 19th and 20th centuries. 40 years later their collection numbered around 1,000 works, making it one of the most important collections of Russian art outside Russia. It was exhibited in the Pushkin Museum twice, in 1988 and 1994.

In 1987 Nikita Lobanov-Rostovsky donated 80 works of Russian graphic art to the Museum, including Alexandra Exter's famous "Theatrical Decorations’’ series from 1930.

On the eve of the opening of the Museum of Private Collections in 1994, Nikita Lobanov-Rostovsky donated his collection of porcelain dating from the first third of the 20th century. Porcelain, and Soviet propaganda porcelain in particular, was a special interest of Nina Lobanov-Rostovsky.

Nikita Lobanov-Rostovsky was also instrumental in helping another collector, Semyon Papkov, present 26 theatrical designs and watercolours by Alexander Benois (1870-1960) to the Pushkin Fine Arts Museum in 1989 and 1990. Papkov donated these works through the "Rodina’ society of Russian expatriots in America.

The Papkov family emigrated from Russia after the 1917 revolution, living for a number of years in Yugoslavia. The family was not well-off, and Semyon Papkov did not receive higher education, working instead as a building contractor. When Yugoslavia was occupied by the Nazis, Semyon and his wife Julia joined the resistance movement: Julia was sentenced to death, before being rescued by partisans. The subsequent deterioration in relations between Russia and Yugoslavia had serious implications for their fate: after many years in different countries they finally settled in San Francisco, where Semyon Papkov lived until his death in 1993.

However, he only began collecting in 1972. Papkov corresponded with Anna Cherkesova, the daughter of Alexander Benois, and collected 400 works by Benois and members of his artistic circle. Papkov also acquired works from Nikita Lobanov-Rostovsky, with whom he began corresponding in 1974. Far from his homeland, collecting works of Russian artists allowed Semyon Papkov to feel that he was still in touch with its national culture. Semyon Papkov donated part of his collection to the Museum.

Another important donation to the Museum was the collection of Jacob F. Shapshal (1880-1947). The artist's son, the Swiss doctor Georgy Shapshal donated 42 paintings and three drawings to the Pushkin Fine Arts Museum via the Soviet Embassy in Bern.

Very few Russians have heard of Jacob Shapshal. He studied in St Petersburg and in Paris, fought in the Russo-Japanese War (1904-1905), and in 1906 on his return to Paris began to participate at the "Société des Beaux-Artes Nationale’’, "Salon d'Automne" and "Salon des Independants". In Russia he contributed to the exhibitions of the "Moskovskoye Tovarishchetsvo Khudozhnikov" (Moscow Fellowship of Artists), or MTKh, from 1911. When World War I broke out Shapshal returned to Russia, enlisted in the army and was wounded in action. In 1916 he joined the MTKh, participating in that group's and other exhibitions in Moscow and St. Petersburg. Shapshal emigrated to the Hague in 1924 and became a Dutch citizen; continuing to exhibit his works at the Paris salons and galleries, he also painted icons. In March 1945 a bomb fell on the artist's studio, destroying many works. Shapshal's son Georgy decided to preserve his father's heritage by donating many of the surviving works to the Pushkin Museum and the Museum of Private Collections in 1989.

Many outstanding and distinguished representative of Russian art, as well as their relatives, have donated their collections to the Museum. They include Svyatoslav Richter, Dmitry Krasnopevtsev, Sergei Solovyov, Alexander Ramm, Leonid Pasternak, Georgy and Orest Vereisky, Alexander Tyshler, Vladimir Weisberg and David Shternberg, not to mention the names of the donors and individual donations already listed.

Over its first decade the Museum of Private Collections has proved to be an absolutely unique institution, presenting both collections of works of art, and collections of the fates of the collectors concerned - outstanding personalities, who preserved real treasures of art and generously transferred them to the Museum. Each of the private collections exhibited in the Museum is an excellent example of the interests, tastes, as well as destinies, of their owners, individuals who will continue to live in the memory of future generations of both genuine connoisseurs of art and grateful viewers. 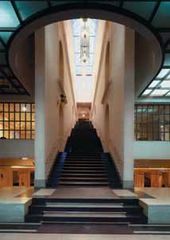 Main staircase of the Museum of Private Collections 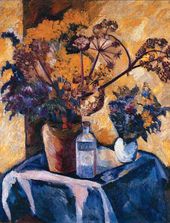 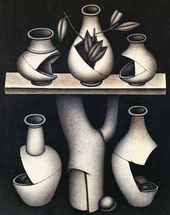 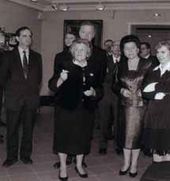 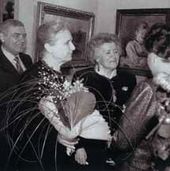 Opening of the Private Collection Museum on 24 January 1994 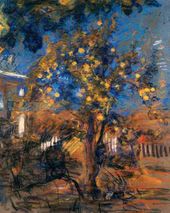 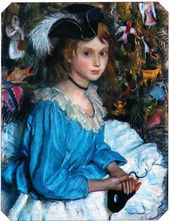 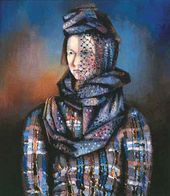