A country may be steeped in the spirit of the artistic culture.
V.Ya. Kurbatov

The strength of Russia is her provinces...
A.P Chekhov

Among Russia's national art museums the Tretyakov Gallery has a very special place. It can be rightfully deemed the "number one" such institution, both from the time of its foundation and for its role in the rise of the nation's self-consciousness - if the country's history is traced with reference to the most brilliant and, no less importantly, the most typically Russian phenomena of its national culture, as well as those which have gained worldwide renown. For all Russians and foreigners who have ever had the chance to familiarize themselves with the collection of the Tretyakov Gallery, this is a wonderful and exciting voyage of travel to Russia, unmatched in terms of the volume of impressions and knowledge acquired. The Russian masterpieces, so carefully kept in the Gallery, vividly demonstrate the traits of the Russian mentality and mind-set. In the Gallery's halls, one comes to perceive the inseparable links between the Russian artistic school and the European artistic process, as well as its distinctive and truly unique nature.

Large artistic museums, primarily representing national art, emerged in Russia in the latter third of the 19th century. At that time the public came to show a keen, profound interest in Russian national art, with this drive led by the most enlightened strata of Moscow's merchant community. Whereas in St. Petersburg the industrialists sought to become a part of the beau monde, in Moscow they gravitated towards scientific and artistic circles. The generation of Moscow merchants of the 1850-60s gave birth to a group of outstanding art connoisseurs, the most remarkable figure of which was Pavel Tretyakov. His Gallery had the best collection of paintings of the peredvizhniki, or members of the "Society for Wandering Exhibitions". "The Wanderers", as they were known by their contemporaries, stood for realistic art, genuinely Russian in both form and spirit. They organized travelling exhibitions in various cities of the Russian Empire, and were willing to contribute to the enlightenment of Russian society in the provinces by familiarizing people with the best examples of national art. This activity helped the establishment in numerous Russian cities of groups and societies of art lovers, artistic schools and, subsequently, local art museums.

The noble and patriotically motivated efforts of P.M. Tretyakov, aimed at the establishment of a free- to-all Russian art gallery, evoked an impressive response from the public and served as an example for his followers. After Moscow, museums soon became popular in the provinces. In 1881, A.P. Bogolyubov (the grandson of the late-18th century writer A.N. Radishchev) submitted to the Minister of the Emperor's Court I.I. Vorontsov-Dashkov a project for the establishment of art museums in every Russian provincial city and university centre: the renowned artist insisted that it was a matter of state importance to carry out his project. He recalled the Western European tradition, saying that "every obscure town has a museum in the town hall, which city dwellers are happy to visit and contribute to". It was due to the efforts of Bogolyubov and his supporters that one of the first provincial art museums was opened in 1885 in Saratov. It was followed by several more art museums and art departments at museums in other Russian cities: Kazan (1895), Nizhny Novgorod (1896), Penza (1897), Irkutsk and Taganrog (both in 1898), and other cities. In most cases their collections were largely dedicated to Russian art. The effort was led and encouraged by renowned masters (among them I.K. Aivazovsky, A.P Bogolyubov, N.A. Koshelev, A.O. Karelin, VP Vereshchagin, K.A. Savitsky) and local enthusiasts: painters and art lovers (K.P Golovkin, I.P Pozhalostin, V.P Sukachev), intellectuals (A.P Chekhov, for example), and municipalities. Local collections were mainly composed of private gifts, paintings shared by the Academy of Arts, donated by their authors, and by Moscow and St. Petersburg art collectors.

The late 19th - early 20th century has been called the period of "museum renaissance" by experts in the history of museums in Russia. That period saw the establishment of the Alexander III Museum in St. Petersburg (now the State Russian Museum), the Fine Arts Museum in Moscow, comprehensive and specialized museums in Stavropol, Yekaterinodar (now Krasnodar), Rostov-on- Don, Simbirsk, Smolensk, Vologda, Tula and many other Russian cities. With the cataclysms that struck the country after the beginning of World War I and culminated in the political upheaval of 1917, the problem of the safety of the national cultural heritage arose. In 1918-1920 decrees were issued on the nationalization of the most valuable art collections and protection of masterpieces and historical monuments; export from the country and selling abroad the most important artistic and historical items was prohibited. The Revolution and Civil War was an extreme time indeed, when intellectuals and museum specialists, motivated by patriotic feelings and professional responsibility, showed true courage. Regrettably, the sales of numerous masterpieces abroad by the state in the mid-1920s - early 1930s should also be mentioned.

The history of Russian art museums is rich in impressive and outstanding events. As early as 1919, the All-Russian Museum Conference adopted a state programme for the development of museums. Its policy to turn museums into cultural centers was in line with progressive tendencies in their organization. In addition, it was Russia that pioneered an absolutely new museum type, unparalleled elsewhere - the museum of painting culture. Such museums emerged in Moscow, Petrograd and several provincial cities, initiated by avant-garde artists. The museums of painting culture showed the progress of the artistic form, and the materials and methods used in creation. One of their primary missions - first of all in the provinces - was the training of young artists in contemporary artistic techniques.

The decades after World War II saw a "museum boom" worldwide, as the number of art museums grew rapidly, primarily in the Soviet Union and the United States. In the 1950-60s in Russia, numerous art museums emerged in the cities of Siberia - Tyumen (1956), Novosibirsk (1958); the Altai region, in Barnaul (1958); the Russian North, in Archangelsk (in 1960); Karelia, in Petrozavodsk (1960); Mordovia, in Saransk (1960), and in several other regions.

The Tretyakov Gallery played a most important role in the foundation and further progress of the nation's art museums. The Tretyakov brothers donated some paintings from their collections to the Radishchev Museum in Saratov. Encouraged by Pavel Tretyakov's efforts, P.M. Dogadin in Astrakhan, V.P. Sukachev in Irkutsk, A.F. Kovalenko in Yekaterinodar engaged in art collecting. In the early 1920s, a nation-wide network of state art museums was established, which included the enlargement of local museums' collections. Thus art museums in the provinces received masterpieces from the Tretyakov Gallery, the Russian Museum and the Hermitage.

In 1999 the Tretyakov Gallery proposed a long-term, nation-wide program aimed at creating the single cultural area and strengthening inter-museum links. Under the new federal project called "Russia's Golden Map", the best items from art museums of the Russian regions were to be exhibited in the Tretyakov Gallery on a regular basis. Each event included the exhibition of from 50 to 100 paintings and the publication of a catalogue. The primary mission of the project is to demonstrate that the collections of Russian art museums comprise a single national asset.

The project "Russia's Golden Map" will help to demonstrate distinctive features and the uniqueness of local art collections, and reveal the specifics of local artistic phenomena.

It has been due to the complicated, "multi-stage" history of the nation's combined museum fund that works from once single, high quality art collections are now distributed around numerous cities. Provincial museums have paintings from the Moscow Public Museum and the Rumyantsev Museum, from the collections of K.T. Soldatenkov, F.I. Pryanishnikov, I.E. Tsvetkov, the Moscow Landmark Institute, and the English Club. Quite unexpectedly for both experts and art lovers, events within the project "Russia's Golden Map" frequently exhibited items from the museums of painting culture alluded to before. These sometimes include paintings which were supposed to have been destroyed during the times of "fighting formalism", which survived owing to the courage of museum employees.

"Russia's Golden Map" is a fascinating "museum serial", giving a rare opportunity to travel in time and space through the history of Russian culture.

The Tretyakov Gallery magazine invites you to visit art museums of the Russian regions. Guided by "Russia's Golden Map", we make our first "stop" in Saratov, at the Radishchev State Art Museum. 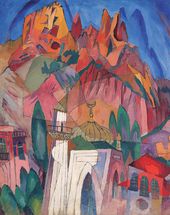 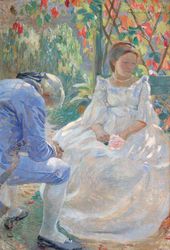