THE REBIRTH OF THE AMBER ROOM

FOR MORE THAN THREE CENTURIES THE AMBER ROOM, A MASTERPIECE OF DECORATIVE APPLIED ART, HAS BEEN THE SUBJECT OF FASCINATION FOR EUROPE, AND REMAINS A UNIQUE PHENOMENON INDEED – SINCE NOBODY HAS SEEN IT FOR ALMOST SIXTY YEARS. ITS HISTORY IS RICH IN ASSOCIATION: FROM THE GREAT PLANS OF PRUSSIAN KINGS TO THE DEVOTION OF RUSSIAN EMPRESSES, FROM THE LOOTING OF THE FASCIST INVADERS TO THE UNSUCCESSFUL ATTEMPTS, CONTINUING THROUGH UNTIL TODAY, TO LOCATE IT. MAY 2003 MARKED ANOTHER STEP IN ITS HISTORY, WITH THE RESTORATION AND OPENING OF THE CEREMONIAL HALL OF RASTRELLI ’S GOLDEN ENF ILADE, THE AMBER ROOM OF THE CATHERINE PALACE IN TSARSKOYE SELO – A ROYAL GIFT INDEED TO MARK THE CELEBRATION OF ST.PETERSBURG’S TERCENTENARY.

This "phoenix" was reborn from 62 amber fragments, a colour slide from 1918, and 86 black-and-white photographs and a few water-colours from the 19th century; the task involved the joint efforts of renowned historians and architects, sculptors, art critics and restorers.

As long ago as 1979 the Russian authorities announced that the Amber Room should be restored, beginning a marathon process that would last 24 years. However, the collapse of the Soviet Union brought with it many financial problems which hindered the realization of this highly expensive and long-term project. Symbolic as it is, but the solution to this critical question was found in Germany: at the end of the 20th century Germany's RuhrGaz AG Company (Essen), which has close business contacts with Russia in the field of the natural gas trade, agreed to invest $3.5 million of sponsorship in support of the project. The united efforts of the two countries - Russia and Germany - made it possible to reconstruct a unique work of stone-carving art, whose "life story" reflects both the dark and the light sides of the development of their historical interconnection, and the fluctuations in the relationship of the two nations.

The idea to create an interior of amber in the royal apartments was original for its time. As early as the 17th century many small fine items were carved from amber - boxes, goblets, chess sets, candlesticks, snuffboxes, sword-hilts, necklaces - and these gems were eagerly purchased by the European royal courts. But the first apotheosis of amber craftsmanship came with the study of the first Prussian monarch; after his death, however, his son and heir Frederick Wilhelm I expressed little enthusiasm for it, while the Russian Tsar Peter the Great was absolutely fascinated by the room. In 1716 he suggested to the King of Prussia to enter into an alliance against Sweden, and Peter was presented with the amber panels for his newly opened Kunstcamera - Russia's first museum - about which he proudly informed his spouse Catherine I on 17 January 1717. The Russian tsar received another present, the light yacht "Liburnina", as well, and in return for the 22 amber panels he sent to Frederick Wilhelm 55 stately grenadiers, a turning-lathe and a goblet which he had himself made. Thus, the exchange of diplomatic gifts was completed.

Much effort was spent on installing the amber study during Peter's reign, but to no result. Only during the reign of Peter's daughter Elizabeth did the architect Rastrelli manage to set up the Amber room in the Winter Palace along with some additional decor. Another contribution to this came from Frederick II, who in 1745 sent a carved amber frame with allegoric scenes glorifying the Russian Empress. This was a very precious gift, not only for those times: today the price of a kilogram of raw amber is about 500 Euro, while only 150 grams of each kilogram can be used for decorative purposes.

Ten years later, at Elizabeth's instruction, Rastrelli moved the Amber Room to her favourite palace at Tsarskoye Selo near St. Petersburg. Its new location was 96 square metres in size, instead of the tiny room in the Winter Palace. Thus it became a royal hall, three walls of which were decorated with amber mosaic panels with mirror pilasters and wooden gilded decor between them. At that time a special amber workshop was opened not far from the Catherine Palace in which many fragments for the hall decorations were made to a superb level of craftsmanship. They matched the Prussian amber decor, with narrow amber panels between the mirror pilasters and amber pedestals beneath them, dessus-deport, with an exquisite amber console and monograms of the Empress Elizabeth. All these were meant for the decoration of the large amber frames with four Florentine mosaics. By 1770 the final design for the Amber Room was achieved; later it was recorded in black-and-white photographs which give an acceptable picture of the composition. From the 1830s onwards there was no proper maintenance of the Amber Room, only sporadic refurbishments, often carried out in a barbarian fashion. The epoch of the superb craftsmanship of the amber jewellers vanished with the deaths of the master craftsmen who kept the secrets to themselves. Only in the 1930s was a plan for a large-scale restoration of the Amber Room developed, but when World War II broke out, this was postponed; during the War the Amber Room was stolen, and disappeared without trace. In Summer 1941 the most valuable collections of amber objects created in the 17th and 18th centuries by German, Polish and Russian masters that were housed in the room's glass-covered displays were evacuated. The panels themselves were dismantled by a special regiment of the German Northern military division during the occupation, packed in 27 cases and taken by German troops to the Koenigsberg Palace, where it was displayed until 1945. The last time it was mentioned by the director of the museum, Alfred Rode, was 12 January 1945, the day on which the Soviet Red Army stormed Koenigsberg Castle, when he wrote: "I am packing the Amber Room". From that time on only mysterious stories, no less mysterious "findings", and rumours have surfaced. The fate of the Amber Room, made as it was of several tons of the golden tree resin (the lightest gem in the world) and often referred to as the "Eighth Wonder of the World", is still unknown. What we do have are more than 130 reported hidden locations - from church ruins of East Prussia to the galleries of Gottingen, from bank deposit safes in America to Russian museum vaults. Some items have been returned, however: from Berlin, a commode which once stood in the Amber Room, and the mosaic "Allegory of the Sense of Smell and Touch", found in Bremen in 1997.

Although some experience in restoration of amber pieces from the 17th-18th centuries had been previously gained, the task of resurrecting the Amber Room was a real challenge. It was not only a unique royal interior and a masterpiece of applied art, but also a work of considerable size; the lack of any original designs and drawings - except for photographs - made the task even more difficult. All efforts were concentrated on solving the problems of applying ancient and forgotten methods of amber finishing, and creating new technologies to guarantee that the restored amber decor would last over time. As a result, a unique Russian school of restoration emerged.

The Amber Room was reborn. The original was often referred to as the "Eighth Wonder of the World", "the greatest mystery of the 20th century", and "the symbol of Russian-German relations". What will be the fate of its "twin duplicate", and how will it be seen by viewers today? One thing is clear: whether regarded as a copy as close as possible to the original, a replica of a past masterpiece, or as a new creation of the decorative arts, it will not be perceived unequivocally. But one thing is indisputable: the rebirth of the Amber Room is the cumulative result of the work of all those talented, enthusiastic and devoted restorers, inspired as they were by its no less talented and unique creators. 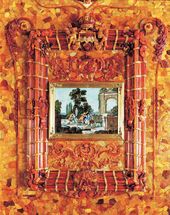 Detail of the restored Amber Room. The Southern Wall. The large amber frame with the Florentine mosaic "Allegory of the Sense of Smell and Touch"

The Ruins of the Catherine Palace, 1945

The Tsarskoye Selo amber workshop. The process of the restoration of the Amber Room

The Tsarskoye Selo amber workshop. The process of the restoration of the Florentine mosaic

The Golden Gate. The main entrance to the Catherine Palace

V. Putin, President of the RF, and G. Schroeder, Chancellor of the FRG, in the Amber Room 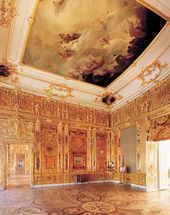 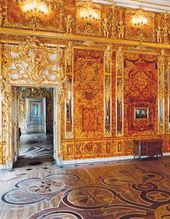