AUGUST 25 TURNED OUT TO BE A VERY SPECIAL DAY – THAT ON WHICH MARIA MARGARIDA AZHEVEDU E. LE-MOS GOMES CLOUDE HANDED OVER TO V.A. RODIONOV, THE GENERAL DIRECTOR OF THE STATE TRETYAKOV GALLERY, KARL BRULLOV’S PICTURE "THE VIEW OF FORT PICO ON THE ISLAND OF MADEIRA" AT THE RUSSIAN EMBASSY IN LISBON, PORTUGAL.

This work of art, which had been in a foreign private collection since soon after its completion, happens to be the most sensational acquisition of the main national museum of Russia. What makes it so exciting is, first of all, the fact that the funds for its acquisition were allocated by the President of Russia, Vladimir Putin, as well as by the Ministry of Culture of the Russian Federation.

With this thrilling event, the work which started three years ago in the summer of 2000 at the anniversary exhibition of Karl Brullov in the halls of the Tretyakov Gallery on Moscow's Krymsky Val has reached its conclusion.

During preparations for the exhibition, and while I worked on it as a guide, it became clear that there were still blank spots in the creative heritage of the famous master which otherwise seemed to have been very well studied; in particular, the period of Brullov's visit to Madeira in 1849-1850 was little known.

Being engaged in research on this very subject at the Russian Academy of Painting, Sculpture and Architecture, I decided to spend our next vacation in Portugal, on Madeira, where Karl Brullov lived and painted 150 years ago.

A fellow countrywoman, Ms. O.P. Makarova, who was then living on Madeira, and who spoke very good Portuguese, was of tremendous assistance to us in our quest for facts and material, as were the directors of different museums in Funchal, the island's capital, to whom we turned for help. Our short visit was busy with searching antique markets, inspection of private collections and studies at libraries and archives.

Our hunt was crowned with a discovery: in the private collection of Margarida Lemos Gomes in Funchal we found a picture which, even at first sight, suggested that it could belong to the hand of Brullov.

The picture is painted in oil on canvas, 65 cm by 77 cm. The painting depicts a view of Fort Pico and surrounding mountains. The fort in the landscape is the same one which is painted in the well- known watercolour, "The Landscape of the Island of Madeira" (kept in the Russian Museum). The silhouette of the fort and the mountain-line and rhythm are more than similar in both pictures. The brushstroke is as swift and expressive as that on the famous "Self-portrait" of 1848.

Brullov's artistic temperament revealed its full force here. The artist used his distinctive saturated palette of dark cherry-reds and golden browns to create a romantic motif of a dark bluish cloud floating in the sunset rosy pink sky, producing the double light effect familiar from "The Last Day of Pompeii". The picture was left unfinished, which is rather typical of Brullov who, having resolved the main artistic task, often neglected the details.

The discovery was overwhelming, but happy as we were, we were very much aware that a serious examination was needed to authenticate its origin, especially as the painting was not signed.

Important evidence of the fact that Brullov left on Madeira some works unknown in Russia was found in the writings of two of his contemporaries.

In the letter of March 2 1851, sent from St. Petersburg to Rome, Prince P.R. Bagration, an aide-de-camp to Duke Leichtenberski, wrote to Brullov: "Since you will probably not go back to Madeira now, my dear friend, would you consider to have all your things which you left there, brought to you; I feel pity for your sketches that will vanish on this wild island."

An art and music critic - also an advocate of Russian culture abroad – P.L. Vacksel, wrote in the book "The Questions of Art, Literature and Science in Russia" published in Portuguese in 1868: "I saw in Funchal, in the house of Senor Zhua Fortunate da Oliveira, two studies by Brullov, depicting Fort Pico and Fort Illeu. This cavalier also owns a portrait of a relative of his, Doctor Alves, which bears the signature of the great artist."

The same surname, "Oliveira", mentioned by Vacksel, was on the subframe of the found picture. A gift inscription by Donna Helena Oliveira was written to its recipient, Zhua Lemos Gomes, who was the father of the present owner. In this way the patient expressed her gratitude to her doctor, who was fond of art, painted with water-colours and had created a small private collection.

As we soon learned from a number of Portuguese sources, Donna Helena Oliveira was one of the daughters of Senor Zhua Fortunate da Oliveira (in whose house Vacksel saw Brullov's works). She was a step cousin of Antonio Alves da Silva, whose portrait was painted by Brullov. She had a story to go with her gift - that the landscape of Fort Pico reminded her of her famous relative, who had treated Brullov in Funchal and to whom, as he departed Madeira for Italy, the Russian artist left his work as a mark of gratitude.

The peculiar manner in which this piece of art had been handed down through time had saved one more work by Brullov for posterity. The gift inscription made the provenance of Brullov's landscape impeccable: it is clear that the picture had spent more than a century in the Oliveira family, then moved to the Gomes family, but had never left Madeira. Thus it was completely unknown in Russia and none of the lists of Brullov's works, even the most complete one compiled by E.N. Atzarkina, mentioned it.

Under such circumstances we were bold enough to ask the latest owner, Donna Margarida Lemos Gomes, to consent to conduct a scientific expertise of the painting in her collection. However, despite her cordial reception and an interesting conversation about art, our proposal was firmly declined. Donna Margarida did not doubt the authenticity of the picture, but had no plans to sell it and asked us not to bother her with similar proposals in the future.

She was equally not interested in showing the picture at the anniversary exhibition of Brullov, as was suggested by the management of the Tretyakov Gallery.

Several times I tried to persuade her to change her mind, but to no avail.

Then, in November 2002, the owner of Brullov's picture found me herself. Everything proceeded rapidly, and her long-awaited consent was received in written form. She also set very strict conditions for the expertise to be done in Lisbon only, and to be followed by further talks about selling the picture to the Tretyakov Gallery.

My gratitude to the Director of our museum, V.A. Rodionov, knows no boundaries, because he believed the evidence I had collected and sent an expedition to the motherland of Vasco da Gama in no time. Our business trip to Portugal created a precedent: it was the first time ever in the history of the Gallery that expertise work abroad was carried out not at the expense of the owner interested in its results, but at the expense of the museum.

The risk was enormous. But the scientific and museum value of the piece, were it proved authentic, could not be overestimated. "The View of Fort Pico on the Island of Madeira" is Brullov's one and only landscape painted in oil, as well as the rarest example of his landscapes.

The expert group consisted of two senior research art historians of the Tretyakov Gallery, O.A. Allenova, a specialist on Karl Brullov's creative work, and E.I. Lomize, a specialist on the technique and technological analysis of paintings of the first half of the 1 9th century.
The results of a complex examination proved the picture and the artist's signature found on the subframe to be authentic and confirmed the point of view of the author of this article, who had found the picture.

At the same time the owner of the picture and the employees of the Tretyakov Gallery signed a Protocol of Intention according to which our museum was given preference to purchase the piece within a period of four months. The owner wanted to sell the picture for 225,000 euro.

I will not write about the long and painful process of fund-raising. Those who paid no attention to the appeal of the Gallery and those who did not keep their promises to donate money are not worth mentioning here. The only reason to speak of them at all is that because of them the Tretyakov Gallery did not manage to pay for the picture within the agreed period. The threat to lose it to potential buyers in other countries became a very real one.

Personal contact with the owner made it possible to gain extra time. Our relationship with Donna Margarida was full of mutual sympathy: I appreciated the fact that she was fond of art, taught drawing and dreamt of opening her own studio. Donna Margarida comes from an aristocratic background, so she did not allow her hot southern temperament to stop her from letting me know first if she was planning any drastic action.

Either by fax or by phone, with the interpreter, Valentina Chan, helping me, I begged Donna Margarida to wait just a little bit more.

My reasons were always the same: the most appreciative and grateful lovers of Brullov's art live in Russia; it is only the specialists of the Tretyakov Gallery who have studied Brullov's manner and technique in the finest detail who would be able to provide the most suitable museum conditions, and restore the picture if necessary to ensure it would have a long life. I repeated over and over again that Donna Margarida's name would be published in the museum catalogue, and that her children and grandchildren would have every right to be proud of the fact that the gem of the family collection enhanced the collection of the world- famous Tretyakov Gallery.

This dramatic story could have ended in disaster.

On July 28 2003, the President of Russia, Vladimir Putin, signed a decree to allocate funds for purchasing Brullov's picture "The View of Fort Pico on the Island of Madeira" for the Tretyakov Gallery. Those working at the Gallery were excited and congratulated each other, while an official message informing the owner of the positive outcome of this complicated process was sent to Donna Margarida.

However, on the same day the Russian Embassy in Portugal sent her reply to us: the owner of the picture considered herself to be free of any previous obligations and through the mediation of some foreign companies which had offered her better financial conditions, was going to submit the piece to auction.

Time was the only factor that could save the situation. Prompt and co-ordinated actions by the Tretyakov Gallery, the Administration of the President and the Ministry of Culture, Ministry of Foreign Affairs, Ministry of Finance and the Bank of Moscow culminated in our victory.

Our special thanks to the Extraordinary and Plenipotentiary Ambassador of Russia in Portugal, B. M. Khakimov, and to the Deputy Minister of the Foreign Affairs, A.V. Potapov. 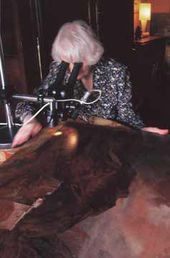 The technological analysis of the picture done by the expert, E.I. Lomize

The artist’s signature in nut ink on the subframe