MARK ROTHKO’S NO. 36 (BLACK STRIPE) FROM THE COLLECTION FRIEDER BURDA 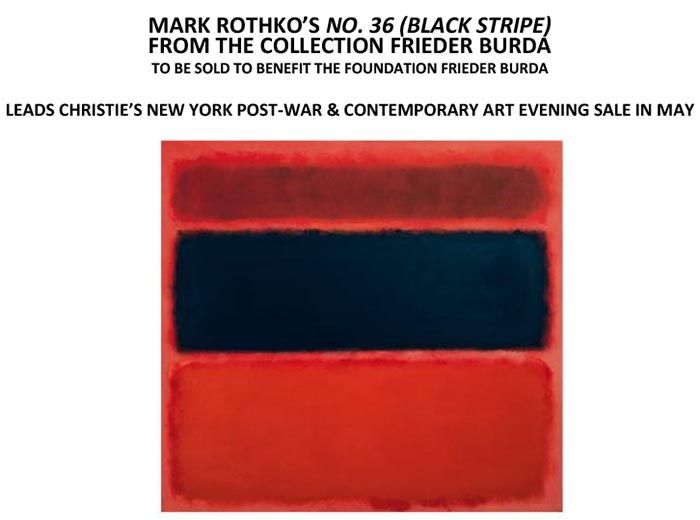 New York - Christie’s is delighted to have been entrusted for the sale of a dazzling master work by Mark Rothko, No. 36 (Black Stripe), 1958, from the collection of the Museum Frieder Burda in Baden-Baden - one of Europe’s most important and prestigious private museums for Classical Modernism and Contemporary art based in Germany. With Rothko’s signature concordance of three shimmering rectangles of directly contrasting color asserting themselves against a luminescent red ground, No. 36 (Black Stripe) is a classic example of Rothko’s mature style of painting and embodies perfectly renowned collector Frieder Burda’s vision and taste for emotional and expressive masterpieces of 20th and 21st Century art. Painted in 1958 when Rothko was engaged with the creation of the series of famous murals for the Four Seasons Restaurant in the Seagram building in Manhattan (now known as the famous The Rothko Room at the Tate Modern in London) – No. 36 (Black Stripe) exemplifies this extraordinary moment in the artist’s life and career. Acquired by Frieder Burda over thirty years ago, No. 36 (Black Stripe) has never appeared at auction and has been featured prominently in every major museum exhibitions devoted to the artist, including the Tate Gallery in London, the National Museum of Modern Art in Tokyo, The National Gallery of Victoria in Melbourne, the Art Gallery of New South Wales in Sidney and was part of the seminal artist’s retrospective at the Fondation Beyeler, in 2001. Estimated $30-50 million, the work will be on view in Hong Kong and London before being offered at auction in New York on May 13th. Proceeds from the sale will allow Frieda Burda’s non-profit foundation to further strengthen its asset base and thus to ensure the operation of the Museum Frieder Burda, which is exclusively funded by the foundation, for generations to come as well as to expand the work of the museum.

Frieder Burda declared, “The decision to part with a work from my collection has been very carefully considered and hasn’t been easy for someone like myself who has a very personal relationship with all works of the collection. No. 36 (Black Stripe) by Mark Rothko is an exceptional work, a solitaire within the collection from which it is hard to separate, however through its unique position within the collection as a whole it lent itself as the best option to implement our long-term plan to part from a work and further refine the collection. It is now strategically the right time and will also allow us to expand our ambitious plans and ideas for the future.”

“Painted in 1958, this vibrant, powerful and deeply emotive painting was created during Mark Rothko's most influential and acclaimed period. Here the artist has arrived at a new structural language of color that was to define his most famous body of works, The Seagram Murals, painted at the same time and which today constitute the celebrated Rothko Room at the Tate Modern, London. No. 36 (Black Stripe) is the quintessential Rothko – orange, black and red - passion and blood. This is the first time that the painting has been on the market for thirty years and we are sure to see a bidding war at the auction in May for this extremely rare and universally enticing work, especially with such a prestigious provenance and exhibition history," stated Brett Gorvy, Chairman and International Head of Post-War & Contemporary Art.

"We feel honored to be have been entrusted with the sale of Mark Rothko's No. 36, Black Stripe on behalf of the Frieder Burda Museum. Ever since its opening in 2004 the privately funded museum built by Richard Meier has attracted hundreds of thousands of visitors and stands out as one of the most beautiful and successfully designed museum buildings in Europe. It pays tribute to the unerring taste, passion, long term commitment and generosity of one of the great 20th Century art collectors of our time", added Andreas Rumbler, Chairman Christie's Switzerland.

No. 36 (Black Stripe) is a rare, large and imposing landscape-format painting from 1958 that holds a place of particular historical importance in the history of Rothko's art. The year 1958 was to prove a watershed moment in the history of Rothko’s life and work. While his paintings would continue to develop, deepen and evolve over the next twelve years, becoming, as many observers have noted, progressively darker throughout the 1960s, nothing Rothko was to make in this decade was to surpass the intensity and glory of his achievements in the 1950s. By 1958, Rothko was not only at the very height of his creative powers - painting, in addition to the now famous Seagram Murals, many of the finest and most representative paintings of his career - he was also at the pinnacle of his influence, and reputation. For the first time in his life Rothko was not only both financially and critically successful but, in the wake of Jackson Pollock’s recent death, he was also widely thought to be the greatest living painter in America.

With its hovering red and dark forms appearing to float around a radiant black rectangle shimmering with fiery energy at the center of the work against a soft red background, No. 36 (Black Stripe) is the embodiment of Mark Rothko's vision. The contrasts lead to a complex visual impression and reaction, Rothko has created a work that introduces us to the sublime, to the rawest and most profound emotions and anxieties of human existence.

Frieder Burda’s internationally renowned collection encompasses around 1000 works of art. In order to maintain the collection and make it accessible to the public, he contracted American architect Richard Meier to build a museum in Baden-Baden which was inaugurated in 2004. The Museum is fully financed and run by the Foundation Frieder Burda which was established in 1998. Rothko’s No. 36 (Black Stripe) was part of several major in-house exhibitions from 2002 to 2008, but over the past decade the collection has dedicated itself with increasing commitment to the current art of a younger generation of painters. The sale of No. 36 (Black Stripe) with the current market strength, especially for major works by Mark Rothko, will strengthen the asset base in the long-term of the Foundation Frieder Burda and thus the Museum Frieder Burda along with its collection and its successful exhibition program. Furthermore this sale will raise funds to continue the museum’s ongoing acquisition of young contemporary art. The core of the collection Frieder Burda with its holdings of works by German Expressionist Max Beckmann, the late work of Pablo Picasso, and major German post-war art will remain untouched by the planned sale.

Christie’s, the world's leading art business, had global auction and private sales in 2014 that totaled £5.1 billion / $8.4 billion, making it the highest annual total in Christie’s history. Christie’s is a name and place that speaks of extraordinary art, unparalleled service and expertise, as well as international glamour. Founded in 1766 by James Christie, Christie's has since conducted the greatest and most celebrated auctions through the centuries providing a popular showcase for the unique and the beautiful. Christie’s offers around 450 auctions annually in over 80 categories, including all areas of fine and decorative arts, jewelry, photographs, collectibles, wine, and more. Prices range from $200 to over $100 million. Christie's also has a long and successful history conducting private sales for its clients in all categories, with emphasis on Post-War & Contemporary, Impressionist & Modern, Old Masters and Jewelry. Private sales totaled £916.1 million ($1.5 billion) in 2014, an increase of 20% on the previous year.

Christie’s has a global presence with 54 offices in 32 countries and 12 salerooms around the world including in London, New York, Paris, Geneva, Milan, Amsterdam, Dubai, Zürich, Hong Kong, Shanghai, and Mumbai. More recently, Christie’s has led the market with expanded initiatives in growth markets such as Russia, China, India and the United Arab Emirates, with successful sales and exhibitions in Shanghai, New Delhi, Mumbai and Dubai.

*Estimates do not include buyer’s premium. Sales totals are hammer price plus buyer’s premium and do not reflect costs, financing fees or application of buyer’s or seller’s credits.