The family of Russian merchants from whom Pavel Tretyakov was descended had no long-term roots in Moscow. It was only in 1774 that the family moved to Moscow from Maly Yaroslavets, a small town near Kaluga where the Tretyakovs had long been known as merchants. In 1 832, the founder of the world famous Tretyakov Gallery and Honorary Citizen of Moscow - a title accorded to very few at the end of the 19th century - was born in the old part of Moscow's Zamoskvorechye area, in Yaki- manka in the parish of St Nicholas' Church in Golutvino, the first child in the family of Mikhail Tretyakov and the first representative of the fourth generation of the Tretyakov family.

Yelisei Tretyakov, Pavel Tretyakov's great-grandfather was considered the patriarch of the clan. In 1795, one of his sons, Zakhar, then a Moscow merchant of the third guild, bought a piece of land with a ramshackle house and other constructions located in Zamoskvorechye near St Nicholas' Church. It was the piece of land referred to in 19th century official documents as the "family estate", and became something of a family nest for the Tretyakovs[1].

The plot Zakhar Tretyakov bought was rather small, long and narrow. It bordered on the grounds belonging to St Nicholas' Church and on an estate owned by a certain Timofei Tretyakov[2]. There were, according to the 1795 bill of sale, "various shabby wooden buildings" on the purchased territory[3]. An idea of how the house might have looked comes from a drawing by Ivan Pavlov, "House in Golutvino" (1929), which appeared in the 1960 edition of the memoirs of Alexandra Botkina, Pavel Tretyakov's daughter[4]. 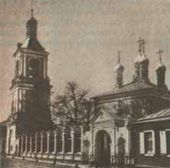 The site plan of the early 1820s - by that time Zakhar Tretyakov was already dead - shows a small residence with a front door and "gallery" on the first floor looking out into the yard. The attached detailed description stated that the house had "the upper floor made of wood and the ground floor made of stone"[5]: it must have been that "small house with an attic" that PS. Shumov, known to have been vicar of St Nicholas' Church for 42 years, wrote about in his memoirs in 1899: "Later, the house was demolished <...>"[6].

Mikhail Tretyakov, Pavel's father, inherited the estate from his father in December 1830[7]. He must have married Alexandra Danilovna Borisova, a rich merchant's daughter, in the spring of 1831. Alexandra Botkina wrote that her grandmother's family was thought to be much wealthier and, thus, more respectable than the Tretyakovs: "Danilo Ivanovich [her grandmother's father] was a wealthy merchant, a wholesale exporter of grease to Britain who lived in his own house. <...>Alexandra Danilovna's father, who gave 1 5,000 rubles as dowry to his daughter, looked at her marriage with Mikhail Zakharovich as a mesalliance <...>"[8]. Nonetheless, Mikhail was truly fond of his wife, treating her with all the respect she deserved, for Alexandra was very intelligent and sensible.

It seems that the fact of his being happily married and free to decide how to spend his money encouraged Mikhail Tretyakov, an energetic and practical man, to improve the piece of land he had inherited[9].

Thus, the old house with its attic was demolished and replaced with a new, two- storey structure with "the upper floor made of wood, and the ground floor made of stone finished with an attic, which is still there" (meaning in 1899, according to the vicar). The house is also known to have been there in 1 835[10].

Comparison of the time when the inherited house in Golutvinsky Pereulok was replaced by a new one and Pavel Tretyakov's date of birth - December 1832 - makes it clear that the house where the founder of the Gallery was born must have been demolished in the early 1830s.

It was intended to erect a new house, as well as rebuild the utility buildings in the backyard as storehouses for the goods Mikhail Tretyakov used to be trading: grain, fabrics, firewood and others. The new house was built on the location of the previous one, "near the belfry”[11] of St Nicholas' Church, which was, unusually, separated from the church. This new, and thus irregular, feature developed in church building in the 18th century: the separately-erected belfry was meant, along with other reasons, to emphasize the importance and beauty of the church itself. Unfortunately, placed in the middle of a large churchyard, St Nicholas' Church, as well as its belfry standing too far from the main building, failed to dominate the vista of the surrounding residential houses.

Panorama of Zamoskvorechye from the Kremlin Hill. 1807. Watercolour

After the rebuilding, from the end of the 1 830s, the Tretyakovs never lived in the house which, together with its utility buildings, was offered for letting. The family moved to a house owned by the Ryabushinsky merchant family, situated on the same Golutvinsky Pereulok opposite the Tretyakovs' house: it still stands there today. In the late 1840s they moved to Babyegorodsky Pereulok to the Shemshurins' house[12]. Only in 1851, after the death of Mikhail Tretyakov, did they buy the house in Tolmachi which was to house the future art gallery. Nevertheless, the original piece of land that had belonged to Pavel Tretyakov's ancestors continued to be part of the family's property, last mentioned in connection with the distribution of Pavel Tretyakov's legacy between his children[13]. Its further history is unknown: even if it, reportedly, managed to survive through to the middle of the 20th century, it was unlikely to have survived the conversion of the 18th century Moscow area of tiny two- or three-storey houses into the commonplace monsters of blocks of flats which grew around St Nicholas' Church in the 1950-60s. It might be at that time, or earlier, that the buildings constructed on the site in the 1870s were demolished too. They were part of a project for a new factory there, but for certain reasons the project was abandoned: some of them were designed by the architect Alexander Kaminsky, Pavel and Sergei Tretyakovs' brother-in-law.

So, it was in that old house in Golutvino inherited from his grandfather and demolished in the 1830s that Pavel Tretyakov was born. The information in the St Nicholas' Church parish register of 1832 not only specifies the exact date of Pavel Tretyakov's birth but also clarifies some family matters relating to the clans of the Tretyakovs and Borisovs.

This text appears for the first time: "On the 14th day of December a son named Pavel was born to Moscow's merchant of the third guild Mikhail Zakharovich Tretyakov and his lawful wife Alexandra Danilovna.” That was the first child in the family, who was baptized on 21 December 1832.

"As Godfather to the child stood the Korchev merchant of the second guild Daniil Ioannovich Borisov [his maternal grandfather], while the female sponsor was merchant's wife Yevdokia Vasilievna Tretyakov [the boy's grandmother on his father's side].”[14]

The newborn child was baptized with the name Pavel in honour of his patron saint, the Reverend Pavel of Latra (Latra, a mount near Constantinople), whose fete is marked on 15 December. Thus, Pavel Tretyakov's saint's day, according to the tradition of the time, subsequently was assumed to be his birthday. It must be noted, however, that the family and close friends knew about the real date; for example, the above-mentioned memoirs by vicar Shumov name 14 December as Pavel Tretyakov's birthday[15].

Curiously, the indication in the register that Pavel Tretyakov's grandfather was a Korchev merchant of the second guild (Korchev, an ancient Russian town on the coast of the Kerch Strait connecting the Sea of Azov with the Black Sea, is now better known as the port of Kerch in Ukraine) seems to be an important detail in Pavel Tretyakov's biography, since it places his mother at approximately the same social level as his father, a Moscow merchant of the third guild. The detail corrects the traditional belief, suggested by a family legend and still circulating among researchers, that, socially and financially, his mother's family was superior to his father's.